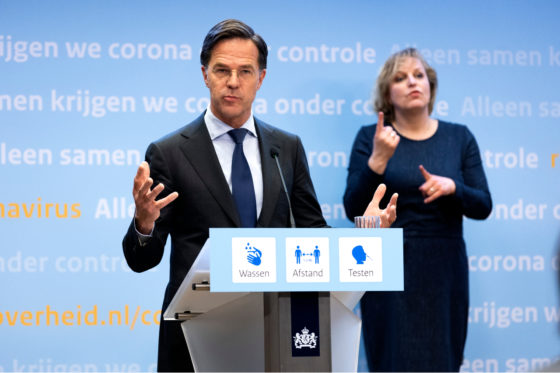 The Dutch government has announced the ‘first cautious steps’ towards ending the coronavirus lockdown by lifting the curfew, allowing more home visits and opening up bars and cafes in the daytime.

Caretaker prime minister Mark Rutte said the moves were ‘risky but responsible’ now that the peak of infections is coming into view, but stressed the need to abide by the basic social distancing rules.

‘Not a huge amount has changed, but just enough,’ Rutte said. ‘Tensions are high but we are nevertheless prepared to take this first step. We can’t do it without taking risks, but they have to be responsible risks.’

Health minister Hugo de Jonge said the government was on course to give every adult at least one vaccine dose by the beginning of July, as promised.

The Janssen vaccine will be available from tomorrow after the European Medicines Agency advised that the risk of developing blood clots was extremely low, De Jonge added.

Rutte set out a six-point schedule changes which will take effect from next Wednesday, April 28, starting with the ending of the curfew that came into force at the end of January.

The plans are in line with a five-stage plan announced at last week’s press conference to relax the lockdown, provisionally at three-week intervals, provided infections do not rise again.

The number of visitors allowed at home per day, which Rutte said was ‘the hardest rule for many people to follow,’ is being increased from one to two.

Bars, cafes and restaurants will be allowed to serve customers outdoors from midday until 6pm, but with restrictions. No more than two people from different households will be allowed to sit together, customers will have to book in advance or on the door and register their details, and there will be a maximum of 50 people per cafe.

Tables will have to be 1.5 metres apart or separated by screens to ensure social distancing is maintained.

Rutte acknowledged that many cafe owners would be disappointed that the changes did not go further. ‘It’s an incredibly difficult time for them and we are not removing their problems entirely with this first step, but it is a first step.’

As previously announced, students will be able to go to college one day a week from next Monday. Rutte said universities and colleges were working to roll out fast tests so that the number of days could be increased soon.

‘At last, students and teachers will be able to have direct contact and students can leave their halls,’ he said.

Shops can allow customers in without an appointment from next Wednesday, but the restrictions on numbers remain in force. Smaller shops will only be able to have two customers at a time, while larger premises can admit one person per 50 m2. Masks will remain compulsory.

Two other changes will allow 100 mourners to attend funerals rather than the current limit of 50 and driving test theory exams to resume.

Rutte stressed that the rules depended on everyone, including business owners and local authorities, ensuring that the basic social distancing rules were not ignored. Public spaces that became too crowded could be temporarily closed, he said.

‘It requires common sense,’ Rutte said. ‘The truth is that the country cannot be unlocked in one go. That’s the lesson we learned last summer.’

But he insisted it was not a ‘gamble’ to ease restrictions despite coronavirus infections continuing to rise and the number of patients in hospital and intensive care above the level at the end of January, when the curfew was introduced.

‘On average the number of hospital admissions is stabilising and the RIVM’s models indicate that we can expect a decline. That’s a model, but we have decided to take this step now nonetheless.’

De Jonge announced several changes to the vaccine schedule, partly to incorporate the single-jab Janssen vaccine. Unlike AstraZeneca, Janssen will not be restricted to the over-60 age group because the number of cases of thrombosis was much lower, he said.

Around a million people aged between 18 and 60 who are vulnerable because of health conditions will be vaccinated by local health boards rather than their family doctor. This includes those with respiratory conditions who are eligible for the annual flu shot.

Teenagers aged 16 and 17 with conditions such as Down’s syndrome will also be vaccinated and prioritised as soon as the over-60s have had their shots, De Jonge said. All over-60s should have their first vaccine by the end of May.

He added that a quarter of the adult population had now been partly or fully vaccinated and four million people have been infected, with the survivors having developed some level of immunity.