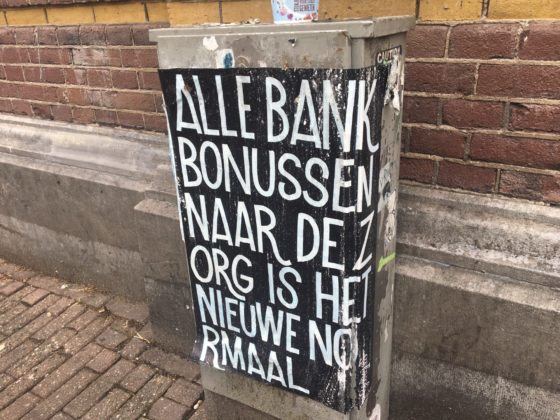 A poster in Amsterdam: ‘Paying all bank bonuses to health care workers is the new normal’. Credit: D.Nicholls-Lee

The pay gap between the board room and shop floor at the Netherlands’ 1,000 biggest companies has closed slightly, national statistics agency CBS said on Friday.

The gross salary of the five biggest earners is now 5.9 times that of the average wage at the company, compared with 6.1% in the previous survey which covered 2017 and 2018.

At the same time, more women are now earning high salaries – one in four of the top earners at the 1,000 big firms in the survey are female. In 2010, the figure was just 17%.

The wage gap is the biggest in the trade sector, where boardroom salaries are 11.2 times that of the average worker, the CBS said. In the financial sector, where the wage gap was 15.7 in 2010, the difference in pay has now gone down to 9.3.

In healthcare and education, areas which traditionally employ a lot of women, the pay gap is smallest at 3.6 and 2.4 respectively. This, the CBS said, is in part due to official limits on public sector pay, which freeze executive salaries to that of a government minister.

The fact that 75% of Dutch women work part time has also had an impact.