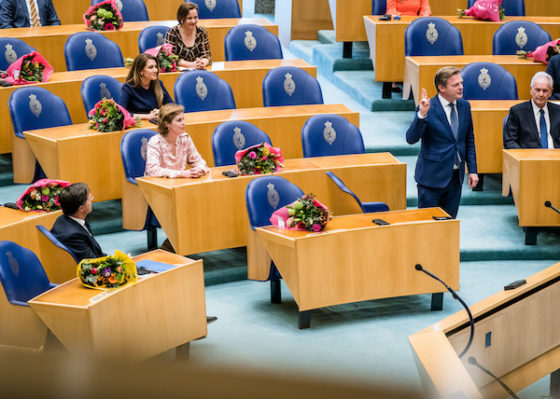 MPs will on Thursday debate the chaotic start to the coalition formation process following their demand on Wednesday that all documents relating to the negotiations so far are made public.

The debate had been due to take place on Wednesday but was delayed by a day to ensure MPs are given all the notes taken by the coalition scouts about talks with party leaders to date.

The formation process was halted last week after one of the two scouts, home affairs minister Kajsa Ollongren, was diagnosed with coronavirus and left the parliamentary complex with a pile of briefing notes visible to waiting photographers.

One entry suggested the position of Christian Democrat MP Pieter Omtzigt was due to be discussed at a later meeting with caretaker prime minister Mark Rutte and D66 leader Sigrid Kaag.

Omtzigt, the popular and combative backbencher who played a key role in exposing the tax office’s mistreatment of families suspected of child benefit fraud, told reporters before being sworn in on Wednesday he hoped it would become clear who had written the text about finding him another job.

‘This memo was not written, someone actually wrote it,’ he said. ‘There is no phantom typewriter around.’ The memo, he said, is an affront to the Dutch voter.

Prime minister Mark Rutte had attempted to head off MPs demands that all documents relating to the talks so far be published, including emails and telephone messages, fearing the move would exacerbate political tensions.

The documents already published, for example, reveal that GroenLinks leader Jesse Klaver is prepared to make major compromises to the party’s stand on immigration and climate change to secure a role in the coalition.

They also show that D66 leader Sigrid Kaag and the VVD are fully in line over economic policy.

But MPs, the Financieele Dagblad points out, are determined to get to the bottom of who put Omtzigt’s position in the spotlight and rejected Rutte’s arguments.

Party leaders are being allowed to see the notes first, and to remove any sections which they disagree with, new scouts Wouter Koolmees and Tamara van Ark told MPs on Wednesday.

If this happens, the fact that some information has been removed will be noted.