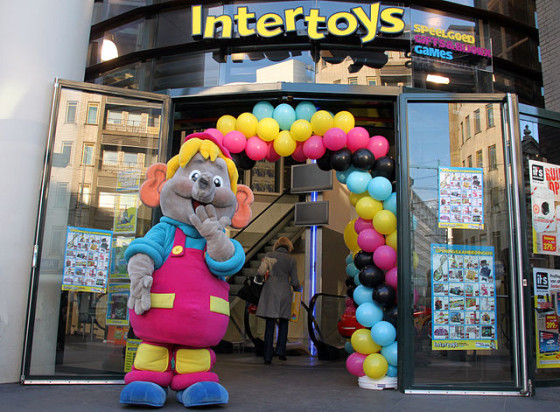 Who’s the undercover warden? Photo: Maurits90 via Wikimedia Commons (DutchNews is not implying Intertoys is among the chains visited)

Local authorities are using undercover wardens to check whether retailers are keeping to the coronavirus shopping rules, the Financieele Dagblad reports.

Shopping by appointment at non-essential shops has been in place since March 3 but the measure will be lifted from April 28.

Retail expert Frank Quix told the paper he knows of at least five to ten cities where wardens have been pretending to be shoppers without an appointment at three major chains and bluff their way in, including Breda, Maastricht and Eindhoven.

‘This pure entrapment and totally inappropriate,’ retail organisations have said.

The paper approached 15 large cities of which only Breda confirmed it used undercover wardens.

Breda local authorities issued 30 warnings and two fines but will not confirm if this was because the retailers in question were in breach of the shopping by appointment rule which carries a €4,000 penalty.

Maastricht and Haarlem local councils said they occasionally used undercover wardens to check if people were wearing masks, or at demos.

Retail organisation INretail confirmed it had had reports of undercover wardens. ‘We know they pretend to be customers. They say thing like ‘my mother is very ill and they need such and such quickly’. Or they act angry and frustrated at not getting in without an appointment. If shop workers refused they they would tell them on the same day that it was a check-up  by the council,’ a spokesman said.

The method was reported to the justice department two weeks ago but it denied all knowledge of it and undercover wardens are still operating, INretail said.

The public prosecutor’s office could not say if using undercover council officials is allowed in this situation because retail and policing are local council matters.

Shopkeepers themselves are not keen to talk, the paper found, because admitting they did not keep to the rules and ‘moaning’ about the method publicly may jeopardise the planned opening of their shops on April 28. Just one anonymous retail chain was prepared to say that it had had three visits from undercover wardens.

Some local councils refuse to police the shop by appointment rule to give shopkeepers more space but this is confusing, Eus Peters of the Dutch retail council said.  ‘Some say they won’t police the rule while others use undercover BOAs. The rule is silly anyway. Why not let in people if the shop is empty? We can’t wait for the 28th.’