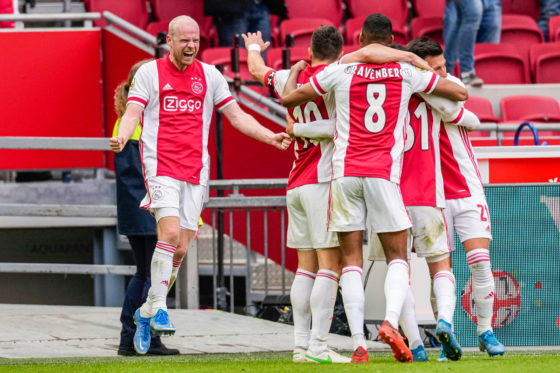 Ajax are just one point away from clinching their 35th Eredivisie title after beating AZ Alkmaar 2-0 in the Amsterdam ArenA.

Midfielder Davy Klaassen tapped in twice from close range after AZ had matched the champions for the first hour of the game. Although Ajax have a 12-point lead with four matches to play, their superior goal difference means the title is a formality.

‘I’m usually a bit reserved, but it can’t go wrong now,’ Klaassen said after the match, which was watched by 7,500 fans after supporters were allowed back into stadiums for the first time since September.

‘It’s a different feeling and a different atmosphere from the moment you step onto the pitch to warm up,’ said Klaassen. ‘It’s how it should be.’ Ajax can put the championship beyond doubt if they avoid defeat at home to Emmen next Sunday.

Defeat for AZ means PSV have a three-point advantage in the race for the second Champions League qualifying place. A penalty by Eran Zahavi proved the difference against a stubborn Groningen, although Roger Schmidt’s side had three other potential goals disallowed, twice for marginal offside decisions.

Feyenoord failed to overtake Vitesse Arnhem in the battle for the last Europa League spot as the two sides played out a goalless draw in Rotterdam. The most notable incident was the dismissal of Feyenoord’s Steven Berghuis for a scything tackle on Maximilian Wittek 15 minutes from the end.

At the bottom of the table Willem II earned a vital three points against fellow strugglers RKC Waalwijk to move to within a point of their opponents. Vangelis Pavlidis scored the winner on 54 minutes when he put away a rebound after his initial shot came back off his team-mate Kwasi Wriedt.

Emmen stayed on course for their great escape as a hat-trick by Michael de Leeuw against Heracles gave them their third league win in a row. De Leeuw scored twice in the closing minutes after Rai Vloet looked to have earned a point for the visitors in the 82nd minute.

The Drenthe side moved up to 16th place above the free-falling VVV Venlo, who took on Sparta without the league’s top scorer, Giorgios Giakoumakis. Goalkeeper Thorsten Kirschbaum kept the Limburgers in contention until the end of the first half, when he was wrong-footed by Laros Duarte’s deflected shot, before Bryan Smeets secured VVV’s 11th successive league defeat in the 67th minute.

The team finishing 16th will go into a play-off competition with six teams from the Keuken Kampioen Divisie next month to decide who joins the two automatically promoted clubs.

Bottom club ADO Den Haag, meanwhile, are nine points adrift of safety and eight points away from the play-off zone after going down 3-0 at home to Fortuna Sittard.

PEC Zwolle, revitalised under new coach Bert Konterman, overcame the loss of their top scorers Henk and Joey Veerman through coronavirus infections to record their third win in four matches at Heerenveen. Pelle Clement marked his first start since the start of March with a goal and an assist for veteran defender Bram van Polen.

Utrecht boosted their chances of a place in the Europa League play-offs at the expense of FC Twente, who lost their third league match in a row. Danilo put Twente ahead after 28 minutes but Utrecht turned the game around early in the second half through Sander van de Streek and Gyrano Kerk.