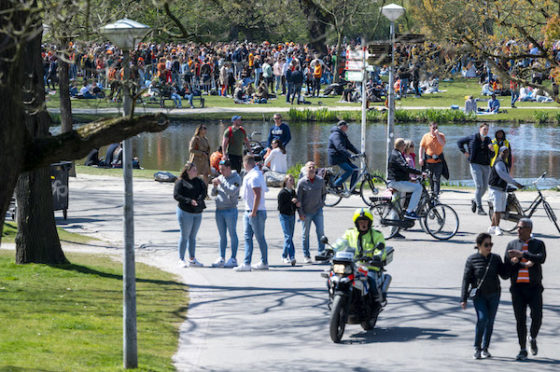 The Vondelpark in Amsterdam was closed. Photo: Evert Elzinga ANP

Amsterdam council has urged visitors not to come to the capital to celebrate King’s Day because the city is ‘too full’.

The traditional street market and concerts have been cancelled because of coronavirus but the sunny weather drew thousands of people to the city centre streets and waterways, despite the official limit on groups.

In the afternoon, officials closed the Vondelpark to new arrivals because so many people had flocked to the park in the spring sunshine. Later in the day, the Sarphatipark was also shut.

In Utrecht, too, officials said the city centre is overcrowded, and urged people to leave. ‘Celebrate King’s Day at home,’ the council said on Twitter.

In Breda, as well, the Valkenbergpark was closed for a while. In Rotterdam, however, police said the streets and parks are busy but manageable.

King Willem Alexander, who spent the day with his family in Eindhoven, said he hoped that ‘this is a King’s Day never to be repeated,’ referring to the coronavirus restrictions which prevented the traditional festivities.

In many places, however, games and other events for children went ahead as normal, and sports clubs too had been encouraged to organise competitions for the under-18s.