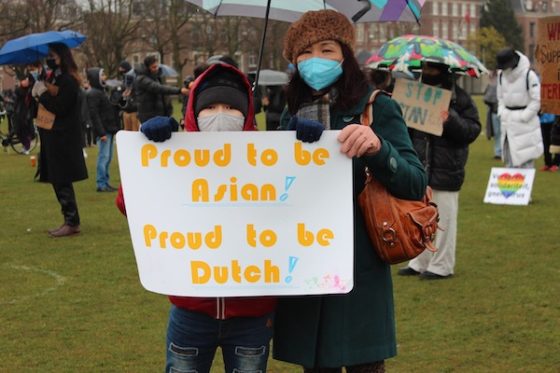 A few hundred people gathered on the Museumplein in Amsterdam on Saturday afternoon to demonstrate against anti-Asian racism and discrimination.

The event was prompted by the Atlanta shootings on March 16 and follows an earlier demo at the end of last month. ‘We felt that we have the responsibility to raise awareness in the western world about Asian hate’, Wendy (22), one of the organisers said.

Wendy, who is studying communication and media, has lived in the Netherlands for the past 4 years, and has personally experienced several racist incidents since the start of the Covid-19 pandemic.

After organising the first protest on March 27, she and her co-organisers wanted to mobilise an even wider public: ‘With the previous campaign, we really wanted to raise awareness in the white society in the Netherlands. It’s really nice that a lot of white people have joined today’s protest, because they’re our main target audience.’

The demonstration was organised together with Pan Asian Collective (PAC) and Asian Raisins, which aim to promote the representation of Dutch Asians, and to stop anti-Asian discrimination.

It featured a wide range of speakers, including Hui-Hui Pan, the founder of PAC, the Dutch-Indonesian filmmaker San Fu Maltha, and Vincent Yeers, who initiated the petition Wij zijn geen virussen (We are not viruses) last year together with Hui-Hui Pan.

From the stage, Hui-Hui Pan called the view over the crowd on the Museumplein ‘a historic moment’. ‘Never were we so visible, and never were we more invisible at the same time,’ she said. ‘Today we stand here, hand in hand, to raise our fists against anti-Asian racism. Enough is enough.’

The brightly colored posters on the stage pictured three fists in different skin tones, mirroring the cause of the Black Lives Matter movement and its iconic fist. 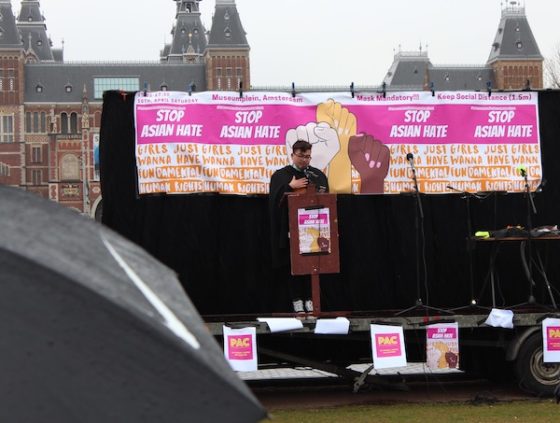 Pan’s words were echoed by the many demonstrators. Yanthi (24), who was born and raised in the Netherlands by a Chinese-Indonesian-Dutch mother, said she had come to support those experiencing racism.

She said she herself has faced discrimination on multiple occasions, but never thought of it as racism. ‘In the schools in the Netherlands they sing Hanky Panky Shanghai to the tune of Happy Birthday, and it’s a bit weird – I never sang along.

‘And almost every Asian person has heard people shouting kankerchinees at them. I have experienced these things, but always saw it as a joke. I didn’t take it personally – I always thought they were just stupid, but that doesn’t make it ok. I shouldn’t have to cope with these things and consider them normal.’

According to NOS, discrimination agencies and hotlines have received an increasing number of reports of racism against Asian Dutch over the past year, in parallel with the spread of Covid-19. However, the majority of incidents continue to go unreported, as many people choose to remain silent.

Another participant, who wished to remain anonymous, said he been verbally attacked for his skin colour.

‘I’ve been guilty of being silent all these years. I’m thankful that people have pushed me to come forward and say, “it’s enough”,’ he said. ‘We’re here for the rights of every single minority in the world. Even though this is a cause for Asians, I’m here because the minorities are done being treated as such. We’re all equals at the end of the day.’

Nearly 1 million Dutch people of Asian descent live in the Netherlands out of a total of 2,4 million citizens with an ethnic minority background.