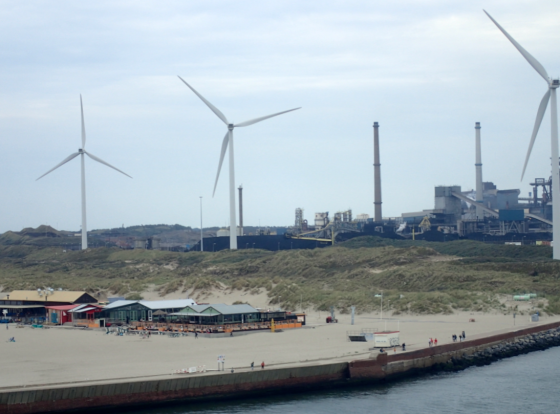 Air quality in the area around the Tata Steel plant in IJmuiden is regularly poor and the local population has more acute health complaints – such as headaches, stinging eyes and nausea – than other parts of the Netherlands, according to new research by public health institute RIVM.

The researchers compared the air quality around the plant with other parts of the Netherlands without heavy industry, and used information from local doctors to establish the extent of the problems.

The researchers did not examine whether the acute complaints are related to or a consequence of the problematic air quality although this will be taken into account in a wider study.

Nevertheless ‘this comparison shows that different types of acute health complaints are more common in the IJ delta region, including shortness of breath, headaches, nausea and chest pain,’ the RIVM said.

Tata Steel said in a reaction that it is important to know the facts, so that appropriate action can be taken. The company is working hard to further reduce the impact of its operations on the local environment, a spokesman said.

Tata Steel has been at the centre of a number of pollution scandals, some of which were condoned by the authorities.

The company’s cyanide discharges, for example, exceeded the European norm but were allowed because the water authorities decided it was ‘not achievable’.

Inhabitants of nearby Wijk aan Zee have also complained for years about the so-called ‘graphite rain’ produced by Harsco Metal, a company which processes slag on the Tata Steel premises. It too contains worrying amounts of toxic substances, the RIVM found in earlier research.

A number of locals are also now taking legal action against the company for endangering human and animal health.

The research comes at a sensitive moment for the company because it has been put up for sale by its Indian parent company. Sweden’s SSAB pulled out of recent talks to buy the plant because of the investment costs to bring it up to SSAB’s own environmental standards.

The plant is the biggest employer in the region with a workforce of almost 10,000. A further 30,000 people are indirectly dependent on the company for their jobs.

Tata Steel is considered an essential industry in the Netherlands and is outperforming the British arm, even though turnover has dropped 20% because of problems facing the car industry.

Tata Steel is pressing ahead with the separation of the two arms, but has not yet said if it is looking for a new buyer for the Dutch operations.