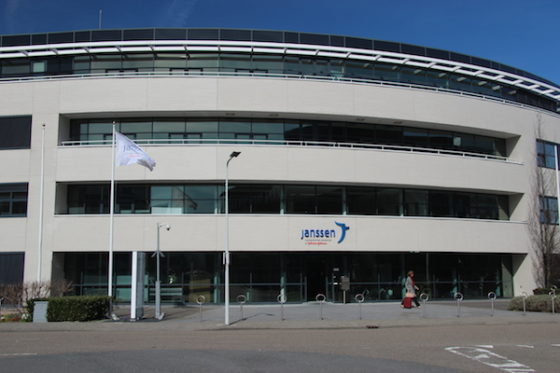 The Janssen headquarters in Leiden. Photo: Bic via Wikimedia Commons

The European Medicines Agency is expected to confirm that the Janssen coronavirus vaccine carries a low risk of thrombosis when it publishes its findings on Tuesday.

The Netherlands has ordered 11 million doses of the single-shot jab, which was partly developed in Leiden, but delivery has been put on hold after a small number of cases of thrombosis in young women who had had the vaccine was reported in the US.

The side-effects, a combination of blood clots in the cerebral vein and low platelet counts, have also been experienced by a handful of people who received the AstraZeneca vaccine. More women than men have been affected.

Despite the EMA concluding that the benefits of the vaccine far outweighed the risks, several countries have restricted the use of AstraZeneca, including the Netherlands, where it is only being given to people over 60.

Though the side-effect is extremely rare – around one instance per 250,000 vaccines – it has been fatal in around a quarter of reported cases.

Frits Rosendaal, professor of clinical epidemiology at Leiden University Medical Centre, said it was likely the Dutch government would restrict the use of Janssen if the EMA links it to blood clots.

‘Just like last time the EMA will say that the benefits of the vaccine vastly outweigh the disadvantages, so press on with vaccinations. But the health council won’t be able to say something different [from its decision on AstraZeneca],’ he told the Volkskrant. ‘They’ve dug their own grave.’

Any restrictions on Janssen will be a setback for the Dutch government’s target of offering every adult at least one vaccine by the beginning of July. Nearly 750,000 doses of the single-shot vaccine have been ordered for the second week of May, when 1.6 million vaccines are due to be delivered altogether, a record for a single week.