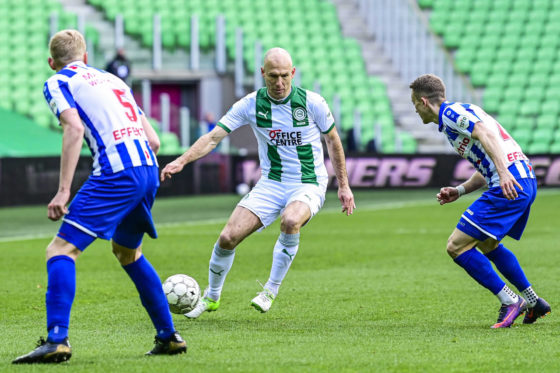 Ajax are just two wins away from claiming their 35th Dutch league title following a workmanlike 1-0 win at RKC Waalwijk.

Sébastian Haller’s first-half goal, flicking the ball over Kostas Lamprou with a high kick, was a rare highlight of a match that the Amsterdammers dominated without getting out of second gear. RKC’s best chance to equalise was a free-kick by Cyril Ngonge that cannoned off the bar.

‘We started the game well, but then we got grit in the engine,’ said coach Erik ten Hag. ‘We didn’t use the possession we had, particularly in the last third of the pitch, and created far too little.’

Ajax remain 11 points ahead of PSV Eindhoven, who won 2-0 at VVV Venlo as Donyell Malen set up Cody Gakpo with a deft touch for the opener before tapping in the second from close range.

AZ are level on points with PSV after beating Sparta by the same scoreline in Alkmaar. Jordy Clasie, standing in for the suspended captain Teun Koopmeiners, opened the scoring on 13 minutes and said afterwards that he was in talks with the club about extending his contract.

VVV’s 10th successive defeat and a 4-0 loss for Willem II at Heracles allowed Emmen to move to within a point of safety. The Drenthe side were the only team in the bottom five to win with a 3-1 victory at Fortuna Sittard, thanks to a late penalty by Glenn Bijl and a stoppage-time strike by Paul Gladon.

Feyenoord strengthened their claim on a play-off spot as they recovered from Leroy Fer’s early own goal to win 2-1 in Utrecht, Steven Berghuis bagging the winner on 57 minutes with a low drive.

The result takes Dick Advocaat’s side to within two points of fourth-placed Vitesse, who could only manage a 0-0 draw at home to bottom club ADO Den Haag.

The long-awaited return of Arjen Robben as a 78th-minute substitute couldn’t save Groningen from going down 2-0 at home to northern rivals Heerenveen. A penalty converted by Henk Veerman just before Robben’s arrival and a late strike by Tibor Halilovic secured the Friesland’s first away win in 11 attempts.

A goal by Virgil Misidjan was enough to earn PEC Zwolle all three points against FC Twente, who took their winless run to seven matches.