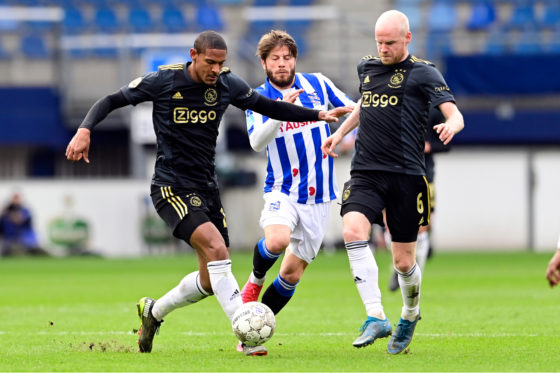 Ajax took another step towards the Eredivisie title with an unconvincing win at Heerenveen on a weekend when the top seven teams all won.

The home side were more impressive in the first half at the Abe Lenstra Stadium and took the lead when Mitchell van Bergen dispatched a shot under the dive of replacement goalkeeper Kjell Scherpen.

Dusan Tadic equalised from the penalty spot 10 minutes before half-time after the VAR panel spotted a handball, while Sébastian Haller diverted Lisandro Martinez’s shot into Heerenveen’s net to complete the comeback on the hour mark.

The result gives the Amsterdammers an 11-point cushion with a game in hand on their rivals, who have six matches left to catch them.

A brilliant curling shot from the edge of the area by Mo Ihattaren crowned PSV’s 3-0 win over Heracles, after Donyell Malen and Denzel Dumfries had given Roger Schmidt’s side a half-time lead.

PSV stay in second place on goal difference ahead of AZ, who narrowly overcame Willem II despite having captain Teun Koopmeiners sent off after four minutes for a clumsy foul. The Alkmaarders then had two goals disallowed before Albert Gudmunsson found the net in the 72nd minute.

Koopmeiners, who confirmed that he had been approached by AS Roma about a possible summer transfer, said: ‘The team deserves a huge compliment for the way they grabbed the win after my red card.’

Vitesse Arnhem also stayed in the hunt for the second Champions League spot by overcoming FC Twente in a game of three penalties. The most controversial was Vitesse’s winner, dispatched by Oussame Tannane with the last kick of the game after Maximillan Wittek appeared to go down easily in the area.

Feyenoord remain four points behind in fifth place after a header by Bryan Linssen and a trademark left-foot shot by Steven Berghuis earned them a 2-0 win in De Kuip against Fortuna Sittard.

Fortuna slipped to 11th place behind Sparta, who won for the third time in four games thanks to two late goals by Lennart Thy against his former club PEC Zwolle.

Emmen were the only team in the relegation zone to avoid defeat, beating RKC Waalwijk 3-0 to close the gap on Willem II and VVV Venlo to four points. VVV lost their ninth game in a row at home to Groningen, despite playing most of the match with an extra man after Groningen’s captain Azor Matusiwa picked up two red cards in the opening 20 minutes.

ADO Den Haag are three points adrift at the bottom of the table after they went down 4-1 at home to FC Utrecht. The visitors auctioned off their matchday shirts to raise money for the Mentelety Foundation, set up by Paralympic champion Bibian Mentel, who died last week.