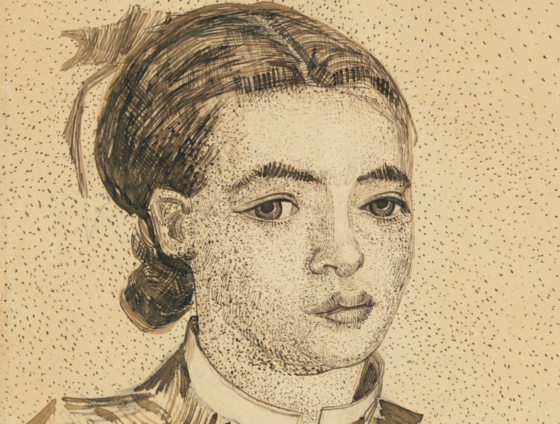 A drawing of a young girl by Vincent van Gogh has been sold at auction in New York on Monday for a record €8.6m to un undisclosed buyer.

The drawing dates from 1888 when Van Gogh lived in Arles, where he painted his most famous works. It depicts a young girl, a ‘mousmé’, or Japanese girl, which also inspired a painting by that name.

Van Gogh had been hoping to sell a number of Japanese prints at the time to cash in on the trend for the exotic. Failing to do so, he became impressed by Japanese art and went on to use its more decorative elements in his work.

He was also inspired by a popular novel of the time. Referring to the painting he wrote to his brother Theo: ‘if you know what a ‘mousmé’ is (you will know when you have read [Pierre] Loti’s Madame Chrysanthème), I have just painted one. It took me a whole week…but I had to reserve my mental energy to do the mousmé well.’

The name of the former owner of the drawing was also kept under wraps by Christie’s but it reportedly formed part of the collection held by art dealers Thomas Gibson in London.

A never before exhibited Van Gogh, Scéne de rue à Monmartre, is currently on show at Sotheby’s in Amsterdam before being put up for auction in March. It will then travel to London and Paris to be inspected by more prospective buyers.