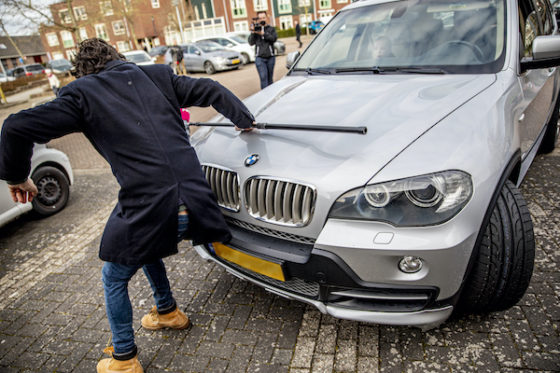 Police in the staunchly Protestant village of Urk have arrested a 35-year-old man who attempted to drive into a journalist reporting on the decision of a local church to welcome hundreds of worshippers despite coronavirus.

The man is suspected of trying to hit Mark Baanders, a journalist with populist broadcaster Powned when he wanted to interview worshippers heading for the Sion church.

Church officials said last week that they would ignore the government’s recommendation to limit the number of worshippers to 30 and to ban singing. Church elder Hessel Snoek told Trouw last week the church had decided to take the step out of concern for its congregation’s ‘spiritual welfare’.

There were also confrontations between journalists and churchgoers in the Zuid-Holland town of Krimpen aan de IJssel, where the Mieras church also decided to open its doors in defiance of the government.

One churchgoer there was also arrested in Krimpen for attacking a reporter from local broadcaster Rijnmond.

The attacks led to condemnation from MPs and the National Union of Journalists, which described them as ‘deeply sad’. The police also came in for criticism for failing to intervene to protect the press and, in Urk, for telling reporters rather than worshippers to leave the locality.

However, Elias van Belzen who represents the fundamentalist Protestant SGP on Nieuwkoop local council said on Twitter that ‘sensation seekers should stay away’.

Van Belzen himself came in for criticism from churchgoers for using the social media service on a Sunday.

In December, figures from public health institute RIVM showed that nine of the 10 biggest coronavirus hotbeds in the Netherlands were classified as Christian council areas.

In January, riot police were drafted in to restore order on Urk after youths went on the rampage following the introduction of the curfew.

Dozens of youngsters, many honking horns in cars and on mopeds, went to the village’s harbour area just after the 9pm deadline and set the drive-in coronavirus test centre on fire.