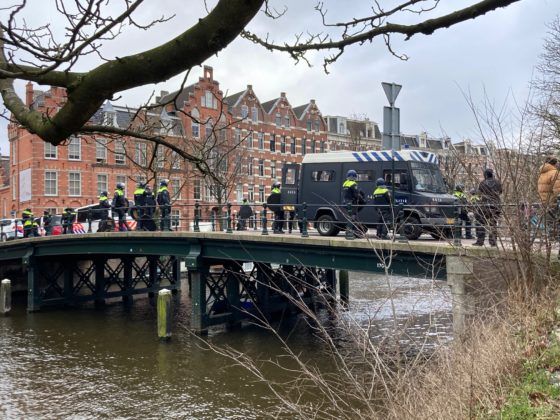 Riot police have ended a demonstration by up to 1,000 people on the Museumplein in Amsterdam, who were protesting about the government’s coronavirus regulations.

Earlier in the day, city mayor Femke Halsema had declared the Museumplein out of bounds and urged people to stay away. Nevertheless, a large group of people, some chanting ‘love, freedom, no dictatorship’ gathered on the grass.

‘Coronavirus does not exist,’ one woman told DutchNews.nl. Another said that the lockdown was all part of the government’s plan. ‘We have lost our freedom and are living in a dictatorship,’ the man in his 50s said.

After being ordered to leave, riot police used water canon in an effort to break up the crowd. Photographs show a small group of people wearing army berets, said to be army veterans, who formed an organised line at the front of the demonstration.

Several people in white coats stood behind them but it is unclear if they were actually healthcare workers.

One large group of demonstrators left the area when ordered to do so and moved on to the nearby Leidsekade, where they were hemmed in by police, who announced they would all be arrested. Ordinary GVB busses then began arriving and taking the demonstrators away. It is unclear where they were being taken.

Despite the heavy police presence, the demonstrators remained calm, occasionally chanting and cheering. A police drone flew overhead and a large crowd gathered to watch.

There have been demonstrations on the Museumplein since the introduction of the curfew at the end of January, and dozens of people have been arrested. Police have not yet said how many people were arrested on Saturday afternoon.