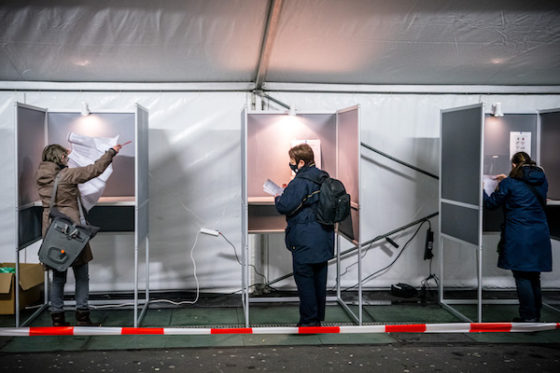 Wednesday is the final day of voting in the Dutch general election and some 9,200 polling stations are open nationwide.

Opinion polls indicate Mark Rutte’s right wing VVD will remain by far the biggest party but that the far-right PVV, the Christian Democrats (CDA) and Liberal democratic party D66 are all battling it out for second place.

Despite the election taking place in the middle of a pandemic, coronavirus has played a very minor role in the debate, with only the far right FvD challenging the government’s strategy. Europe too has not been a major topic.

Instead, discussion has focused on climate change, taxation and housing and these, said the NRC, are the ‘massive issues‘ which will form part of the coalition negotiations.

In total, over 13 million Dutch nationals are eligible to cast their vote to elect 150 MPs for the lower house of parliament. The polls close at 9pm and the first exit poll will be published shortly afterwards.

Football stadiums, churches, shops and cafes have all been transformed into polling stations for today’s vote. Some 12% of people have already voted via the 1,600 polling stations which opened on Monday and Tuesday in an effort to spread voting and minimise the risk of picking up coronavirus.

In addition, a further 2.4 million people over the age of 70 have been able to vote by post. On Tuesday, the government was forced to change the rules for ensuring the secrecy of postal votes after it emerged up to 8% could be declared invalid.

Leaders of the eight biggest parties currently in parliament took part in their final debate of the campaign on Tuesday evening and showed, according to the Volkskrant, that ‘the differences between the parties are minor and that 2021 is the year of “hyper-fragmentation”.

There are currently 13 parties in parliament but opinion polls suggest there could be as many as 16 after today’s vote.

The polls also suggest that at least four parties will be needed to form a new coalition government and that the current coalition – VVD, D66, CDA and ChristenUnie – would still have a majority.

DutchNews.nl will be covering the count via Twitter and a live blog after the polls have closed.