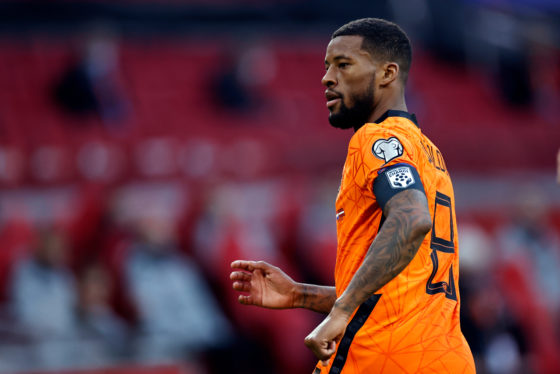 The Netherlands’ weekend World Cup qualifier against Latvia ended in a routine 2-0 victory for the home side, but the game itself was overshadowed by events off the pitch.

The players’ decision to draw attention to Qatar’s human rights record was criticised by both sides in the debate, while there were also question marks over the use of the match as a FieldLab experiment, with 5,000 spectators allowed to attend under strict conditions.

The team wore black T-shirts before kick-off with the slogan ‘Football supports change’, a reference to the dangerous and inhumane conditions for workers building the stadiums for next year’s tournament in the Gulf state, as well as its record on equal rights.

Captain Georginio Wijnaldum sported the same slogan on his captain’s armband during the game. The football association KNVB said the armband had a ‘real meaning’: ‘We wear bands for freedom, tolerance and inclusivity. So that we are all captains together.’

Amnesty International said the gesture by the players was a ‘nice start’ but needed to be backed up by more than mere words. In a statement, the organisation’s Dutch branch said: ‘Let FIFA know that they have to do more against the exploitation of labour migrants in Qatar. Will you sign and share our petition for real change?’

Football agent Mino Raiola told TV talk show Studio Voetbal that it was unfair on the players to ask them to carry the responsibility for highlighting human rights abuses in the host nation.

‘The players haven’t decided where we should play football,’ said Raiola, whose clients include Matthijs de Ligt, Mohamed Ihattaren and Zlatan Ibrahimovic. ‘I think it’s strange that we put pressure on the players and allow them to play the political game.’

The KNVB came under fire for organising the FieldLab at a time when coronavirus infections have been increasing for several weeks.

Virologist Bert Niesters of the UMC teaching hospital in Groningen said: ‘Why are we doing a study with 5,000 people while infections are rising? And in Amsterdam as well, where there are already so many infections?’

Fans with tickets for the match had to take two coronavirus tests beforehand and produce negative results, and expected to take a further test afterwards.

Epidemiologist Patricia Bruijning, of the UMC Utrecht hospital, said the match would provide important information about whether fans could safely attend games during this summer’s European Championships, which begin on June 11.

‘The expectation is that the number of infections and hospital admissions will have declined sharply by then,’ she said. ‘But it’s hard to imagine that the stadiums will be full.’

Previous Fieldlab events have included an André Hazes concert in Amsterdam and two Eerste Divisie football matches . Four people are known to have tested positive following the Andre Hazes concert on March 7, out of an audience of 1300.