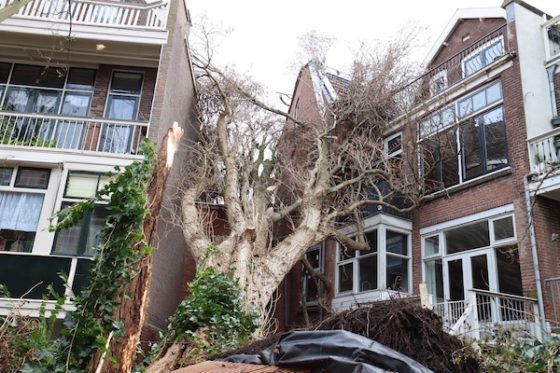 Trees blew down nationwide, including this one in Rotterdam. Photo: GinoPress via ANP

One person has been killed by a falling tree in Limburg as winds of up to 100 kph swept across the Netherlands on Thursday.

The person who died was out walking alone near the village of Bemelen when the tree blew down, local broadcaster 1Limburg said.

The wind has been particularly strong in the western half of the country, where hundreds of reports of falling trees and damage to buildings has been reported.

In Noord-Holland province the dyke between Enhuizen and Lelystad was closed to lorries and several coronavirus test centres were closed.

In Rotterdam, a tree fell on a hall where pupils were taking exams but there were no injuries, school head Arjan van den Bosch told local broadcaster RTV Rijnmond.

The strong winds also disrupted some train services, and trains between Amsterdam and Utrecht were cancelled until at least 5.30 pm because of a broken overhead cable.

The KNMI has issued a code yellow weather warning for the storm, which will die down in the afternoon, when it will turn cloudier with some rain. Thunder, lightning and hail could also hit later in the day and the maximum temperature will be around 11 Celsius, the KNMI said.

The strong winds are due to a large area of low pressure moving across the Netherlands. It will remain windy, cloudy and wet up to the weekend, although there may be some sunny spells, the KNMI said.