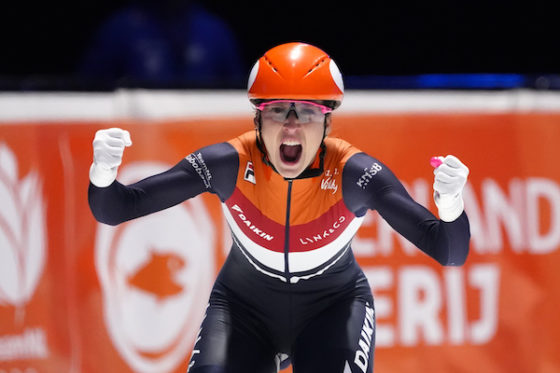 The Chinese and South Koreans may have been missing from this weekend’s short track world speed skating championships because of travel restrictions, but Dutch skater Suzanne Schulting emerged as the big winner of the event.

‘I could not have done any better than I did,’ Schulting told broadcaster NOS after the Dordrecht event concluded. ‘It is fantastic.’

Schulting took part in 14 races during the tournament and won all of them, resulting in a maximum five gold medals, including the allround title.

As during the long track world championships last month, some of the best skaters in the world were missing because of the travel ban. ‘I had expected more opposition but I had been skating new records in the previous weeks, and I set two personal bests in Dordrecht,’ she said.

Schulting is only the second ever women to make a clean sweep of the medals. Canada’s Sylvie Daigle was the first to do it in 1983, but there was no world title awarded for the relay that year.