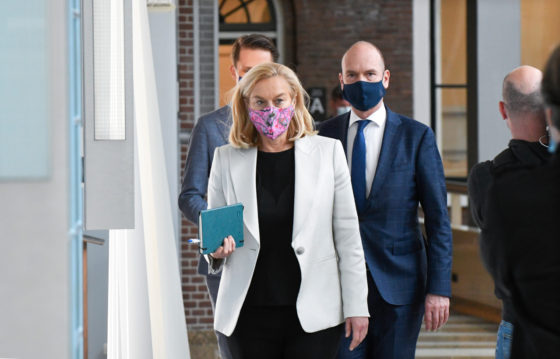 The nine smallest parties in the new parliament have set out their preferences for the new government coalition on the second day of exploratory talks.

On Monday it was the turn of the biggest parties, headed by the VVD and D66, who are expected to form the base of the next coalition. They have both been assigned a scout (‘verkenner’) to canvas the views of all party leaders and report back to parliament.

Prime minister Mark Rutte said the Christian Democrats (CDA) would be his first choice, but its leader, finance minister, Wopke Hoekstra said it was ‘not attractive to join a liberal engine block’.

Eerdmans was one of the leaders who met parliamentary scouts Annemarie Jorritsma of the VVD and Kajsa Ollongren of D66 on Tuesday to share their thoughts.

D66 wants to build a progressive coalition with parties on the left, but Kaag did not name any of them individually. Labour (PvdA) or GroenLinks (GL) are seen as the front-runners, although both indicated before the election that they would only join the government as a double act, not separately.

PvdA leader Lilianne Ploumen said she was ready to ‘take responsibility’, a sign that she is open to the idea of joining the cabinet, while Jesse Klaver of GroenLinks said only a progressive left-wing cabinet would tackle the ‘nitrogen crisis, the climate problem and inequality.’

Neither Ploumen nor Klaver mentioned potential partners by name, indicating that neither sees the pre-election pact as a deal-breaker. Rutte’s statement that he wants a coalition with a majority in the lower house but would settle for a near-majority in the senate suggests he would prefer to avoid a five-way combination.

The ChristenUnie, which was the fourth party in the last coalition, is also seen as a contender, but leader Gert-Jan Segers has said he will demand a ‘higher price’ for its participation this time.

The CU has fundamental ethical differences with D66 on medical issues such as abortion and euthanasia and will be wary of the fact that D66’s 24 seats will give it more clout at the negotiating table than in 2017.

‘This needs to be a coalition that prevents its differences turning into points of bitter contention,’ Segers said on Tuesday.

First in the door was Esther Ouwehand of the Animal Rights Party (PvdD), which won six seats on a radical environmentalist platform and has been in parliament since 2006.

Ouwehand said she was prepared to join the coalition ‘if the VVD shifts a little and we all agree to comply with our international commitments on climate change and the problem of nitrogen emissions.’

The pro-European group Volt, the orthodox Protestant SGP and migrants’ rights party Denk will also speak to the two scouts, along with the three solo MPs representing 50Plus, the Farmers’ Citizens’ Movement and left-wing equality party BIJ1.