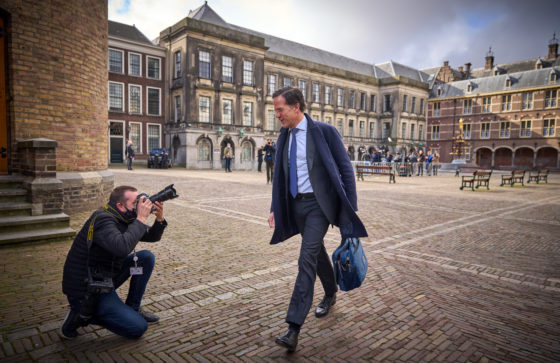 Mark Rutte on his way to the meeting. Photo: ANP/Phil Nijhuis

Prime minister Mark Rutte regards far-right group JA21 as a serious option for a fourth coalition partner, he told reporters on the first day of exploratory talks to form the next government.

Rutte said he wants his new cabinet to have a majority of seats in the new parliament and as close as possible to a majority in the senate. JA21 won three seats in last week’s general election but also has seven senators who previously represented Thierry Baudet’s Forum voor Democratie, the party it broke away from in the autumn.

However, Rutte is likely to meet strong resistance from D66, which finished second in the election and is seen as indispensable in the new cabinet. The progressive liberal party and JA21 are poles apart on the key issues of migration, Europe and climate change.

Annemarie Jorritsma of the VVD and D66’s Kajsa Ollongren are meeting all 17 party leaders on Monday to canvas their views on the next government, which will form the basis of a scouting report to parliament. The parliament will then appoint an ‘informateur’ to chair the talks between potential coalition partners.

Rutte’s other preferred partner, the Christian Democrats (CDA), is expected to join the coalition but could conceivably opt out after it lost four seats to go down to 15 MPs, eight fewer than D66. That means the CDA will have to accept fewer ministerial posts in a new cabinet.

The fourth party in the last coalition, the ChristenUnie, would also make up the numbers, but they have fundamental differences with D66 on medical-ethical issues and leader Gert-Jan Segers has said he will demand a ‘higher price’ this time.