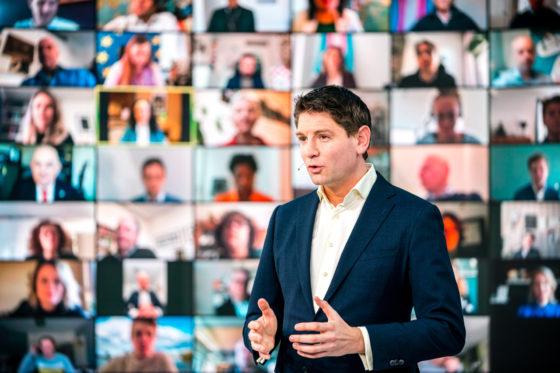 Ahead of the March general election, DutchNews.nl is interviewing a number of prominent MPs about their party’s policies. Today, Gordon Darroch talks to D66 MP Jan Patternotte.

The election campaign has been criticised for lacking drama, but one issue that still polarises views is dual nationality.

At one extreme the anti-immigration nationalist PVV, led by Geert Wilders, wants to strip dual nationals of the right to vote in national elections and recently said parliamentary chairman, Khadija Arib, should be removed because her Moroccan citizenship, which she cannot revoke, creates ‘the appearance of having a different loyalty’.

At the opposite end is the progressive-liberal group D66, which tried to change the law to enable Dutch nationals living abroad to take a second citizenship without surrendering their passports.

In the end the rule was only brought in for UK-based Dutch citizens who needed to secure their rights after Brexit, after other parties, including Mark Rutte’s VVD, blocked a reciprocal arrangement for British people in the Netherlands.

‘Nationality should be a free choice, as far as we’re concerned,’ says D66 candidate Jan Paternotte, who is fourth on the party’s list of election candidates and its spokesman on integration. ‘The suggestion that you can’t be a dual national because you somehow have a different loyalty is utterly wrong. We see so many people with dual nationality in the Netherlands who play an important role, like our deputy prime minister [D66’s Kajsa Ollongren], who has Swedish nationality.’

Given the long-standing animosity between D66 and Wilders, it is no surprise to hear Paternotte rule out a coalition with the PVV after the election. ‘I speak to a lot of Dutch Moroccans and they worry about what will happen if Geert Wilders gets into power. It’s appalling that people who are born here can’t feel at home because of his style of politics.’

The same goes for the young far-right pretender, Thierry Baudet, whose Forum voor Democratie party was almost brought down in the autumn by group chats riddled with anti-Semitic messages.

Paternotte, 37, spent a decade as a city councillor in Amsterdam before being elected to parliament in 2017 and saw how the capital’s Jewish community watched the emergence of Baudet anxiously. He is fiercely critical of the decision by the VVD and Christian Democrats, D66’s partners in government in The Hague, to form a provincial coalition with Forum in Noord-Brabant.

‘It legitimises racism and anti-Semitism,’ he says. ‘It says to Dutch Jews that the CDA and VVD apparently think it’s acceptable to work with a party that is guilty of anti-Semitism time and time again.’

Paternotte dismisses the idea that bringing Forum into a coalition and making it compromise on issues such as green energy could act as a disinfectant: ‘Racists and anti-Semites don’t turn good by co-operating on windmills. You need to show leadership, which means convincing people that this is not the right way.’

D66 has also declined to take up GroenLinks leader Jesse Klaver’s offer of a pre-election pact on the left, even though the parties’ policies overlap on a range of issues from climate change to expanding the regional rail network.

‘We simply don’t think it’s good to divide Dutch politics into two blocks. And initially Jesse Klaver had a plan to form a coalition with Labour (PvdA) and the Socialists (SP). The SP is a party that talks about leaving the euro, which would mean practically leaving the EU. They’re a long way apart from us.’

D66 has worked well within the current coalition, Paternotte says, despite the sometimes uneasy relationship with the smallest partner in the coalition, the ChristenUnie. The irreconcilable differences on ethical issues such as voluntary termination of life (‘voltooid leven’), abortion, prostitution and the legal cultivation of soft drugs are well known. But they’re often on the same side on humanitarian issues, such as the recent vote describing the treatment of China’s Uighur minority as genocide.

‘What’s struck me in the last few years is that we have these differences on medical-ethical issues, but in my areas such as aviation, education and integration, we’ve been very quick to agree with the ChristenUnie,’ says Paternotte. ‘They have a conservative side, but they also have a very progressive side.’

As a progressive party, D66 sees migration as an opportunity, not a threat. New migrants, including asylum seekers, should be encouraged to live, work and contribute to society, Paternotte says. ‘For a long time we’ve made it difficult for people in the Netherlands with our worthless integration system, where people rely on the market and get poor quality language lessons.

‘What we should be doing is saying to people: you’re here, welcome, now you need to join in. Give them the chance to learn Dutch, train for jobs and find work. The quicker you give shape to integration, the more people will support it. When people are critical of immigration it’s not so much about refugees as asylum seekers from safe countries like Morocco who have no chance of staying here.’

D66’s manifesto also sets out detailed plans to tackle institutional racism, with fines of up to €10,000 for employers or agencies with discriminatory hiring policies and the appointment of a national co-ordinator on racism and discrimination. Specialist police officers would be assigned to ensure cases of alleged discrimination are investigated thoroughly.

‘What often happens now with a complaint of discrimination is that the police find it difficult to investigate and find evidence, so it gets written up and filed away,’ says Paternotte. ‘But that’s how people get away with it. If people are subjected to racist or anti-Semitic abuse we need to make sure people are punished for it.’

Paternotte also says the police need to be more representative of the community they serve. ‘Until a few years ago the police didn’t reflect the make-up of the Netherlands at all,’ he says. ‘In Amsterdam we had a situation where only around 1% of officers had a non-western or non-white background, when Amsterdam is one of the most diverse cities in the world. The police have worked hard to change things and should be complimented for it. But we’re not there yet.’

The scale of the challenge was underlined a few weeks ago, when five officers in Rotterdam’s police division received written warnings for sharing racist messages in a WhatsApp group. ‘Situations like the one we saw in Rotterdam will probably arise again in the next few years but we shouldn’t accept them. It needs to be included in police training. The way to deal with it is to have senior officers clearly condemn it and not excuse it, and if necessary discipline people for it.’

On education, D66 prioritises tackling inequality on both sides of the classroom, by investing in schools in low-income areas, raising teachers’ salaries and closing the pay gap between primary and secondary schools. Trainee teachers would no longer have to start in the early years classes, which Paternotte says puts off men from joining the profession. Like Labour and GroenLinks, D66 has changed tack on student financing and wants to give all students a monthly tax rebate of €300, topped up by grants of up to €400 for those from lower and middle-income families.

The loan system introduced in 2015 has caused stress and financial anxiety for students whose parents are unable to support them, says Paternotte. ‘I’ve spoken to plenty of students who’ve had to work more or borrow far more, which has made it difficult for them later to buy a house, and who feel under pressure because they see how quickly they run up student debts. We want everyone to be able to study and have an equal chance.’

Europe is also central to D66’s plans, and Paternotte says the coronavirus pandemic and Brexit have shown how much the Netherlands relies on European co-operation. He sees the departure of the UK as a turning point for the Dutch, who have often served as a buffer between Britain and the mainland.

‘Brexit is a tragedy,’ he says. ‘But the reality is that the British are out and I don’t think they’ll be coming back any time soon. From our point of view the Netherlands needs to forge strong ties with France and Germany because they’re the most important players in the EU.’

D66 wants the EU to have more power but also more accountability, with a directly elected commission president and a European parliament with powers to initiate laws and hold commissioners directly to account. Membership of the EU would be enshrined in the Netherlands’ constitution and a minister would be appointed for European affairs. And meetings of the Council of Ministers would be held in public, so ‘Brussels’ can no longer be blamed for unpopular decisions taken by governments.

During the coronavirus crisis Rutte raised the hackles of Mediterranean leaders as the front man for the ‘frugal four’ nations that wanted to impose tight conditions on any financial support for the countries that suffered most in the first wave of the pandemic.

‘What we’ve seen Mark Rutte try to do is form a league of small nations that are slightly eurosceptic,’ says Paternotte. ‘The Netherlands doesn’t belong in that kind of B-league. What we should be doing is working with the most important countries that want to make Europe stronger, because Europe is essential for most of the challenges we face.

‘You can see it in this pandemic: the fact that we don’t have a common European policy on travel or that co-operation on vaccines still isn’t sorted out. All missed opportunities.’

The pandemic has exposed Europe’s deficiencies at both national and collective level, but Paternotte believes that we can emerge stronger if we learn the lessons. Scientists have returned to the corridors of power and the public arena, and nations have learned the hard way about preparing for medical emergencies. ‘It’s an opportunity, because if we know better how to deal with infectious disease, we can restrict the spread of viruses in future years. So we can come out of this healthier, but it’ll take a long time.’