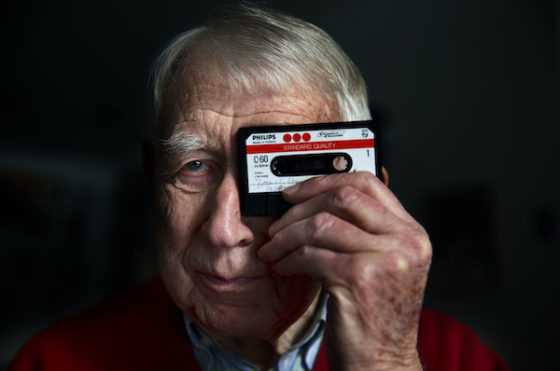 Lou Ottens, inventor of the cassette tape and a CD pioneer died aged 94 at his home in Duizel in Brabant on Saturday, Dutch media report.

Ottens, who studied to be an engineer, started working for Philips in 1952. Eight years later he became head of the firm’s recently introduced product development department. Within a year he and his team had developed the first portable tape recorder of which over a million were sold.

Two years later he revolutionised the old reel-to-reel tape system by inventing the cassette tape. ‘I got annoyed with the clunky, user-unfriendly reel to reel system, it’s that simple’, Ottens said later. The new carrier had to be small enough to fit into his jacket pocket, Ottens decided, and he had a wooden model made to determine the ideal size.

In 1963 the first plastic encased cassette tape was presented at an electronics fair carrying the slogan ‘smaller than a pack of cigarettes!’

The tapes were quickly copied by the Japanese but in different formats. Ottens managed to make a deal with Sony to use the mechanism patented by Philips to introduce a standard cassette which was then rolled out globally. Over 100 billion were sold worldwide.

Ottens went on to develop the CD, which again became a Sony-Philips standard and which sold over 200 billion.

In 1986 Ottens retired but he was often asked if he was proud of his inventions, which allowed millions to have access to music. ‘I have no ‘pride dial’’ Ottens said in an interview, stressing that both inventions were team efforts.

His biggest regret was that that Sony, not Philips, invented what he considered to be the ideal application for the cassette tape, the Walkman. ‘That still hurts,’ he said.

Dubious about the recent revival of the cassette tape Ottens said ‘nothing could beat the sound of a CD.’