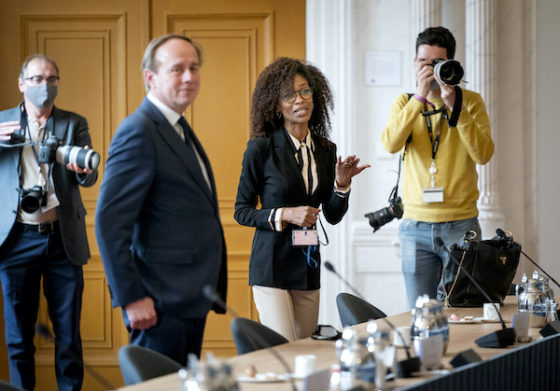 The leaders of the 17 parties which won seats in Wednesday’s general election met parliamentary chairwoman Khadija Arib on Thursday afternoon and agreed that Annemarie Jorritsma and Kajsa Ollongren should start off the coalition formation talks as joint verkenners, or scouts.

The role of verkenner is to establish what the most likely coalition would be. After that an informateur puts together the details and once that process has been completed, the formateur – usually the leader of the biggest party – puts the cabinet together.

The entire process can take months and speculation is rife about which parties could join the VVD and D66 and possibly the Christian Democrats. Together, the three parties are just short of a majority.

The ChristenUnie, which is part of the outgoing coalition, would seem the obvious choice but may not suit D66 because of its stance on medical and ethical issues, insiders say.

And Labour leader Lilianne Ploumen made it clear before the election that the PvdA would not join a cabinet as the only left-wing party. She told reporters on Thursday she saw ‘no reason’ to change that position.

Jorritsma and Ollongren have to report back to parliament at the end of the month, when the new parliament is due to be sworn in.

Meanwhile, Thierry Baudet, leader of the far-right Forum voor Democratie, who avoided commenting to the press on Wednesday evening about his party’s major gains, told reporters he expected to be received at the coalition talks table with ‘open arms’.

‘We are the biggest winner in the election and the biggest winner can take the initiative, so it will be exciting,’ he said. Most parties have already ruled the FvD out as a potential partner but these are pre-election promises ‘no longer worth a thing,’ Baudet said.

Caroline van der Plas, leader of BBB or BoerBurgerBeweging (farmer citizen’s movement), which won one one seat, turned up at the parliamentary complex on a tractor. She wants to see the setting up of a new ministry for rural affairs which should be located at least 100 kilometres from The Hague and have ‘its feet in the mud’.