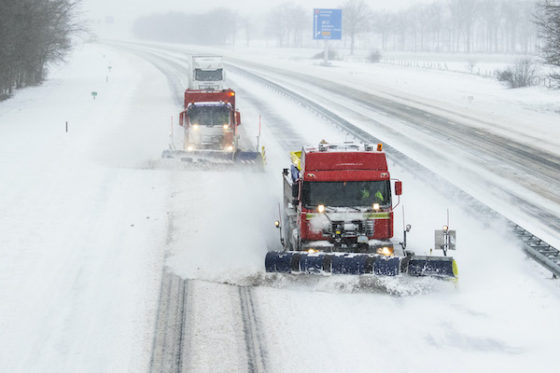 Snow ploughs in action on the A1 motorway on Sunday morning. Photo: Vincent Jannink ANP

The Netherlands woke up to wintry scenes on Sunday, with a layer of snow covering most of the country apart from the far south and north.

The snow and strong winds are expected to continue for most of the day, but it could be well into evening before it stops in the north, weather forecasters say.

The transport ministry’s roads authority has sprayed 17 million kilos of salt on the roads since Saturday evening in an effort to keep them clear. Nevertheless, there have been a string of accidents due to the difficult conditions and the slip road between the A15 and the A4 was closed for a time after a lorry jack-knifed.

The ANWB motoring organisation is recommending people stay home unless their journeys are absolutely necessary.

Problems on the railways have led to all trains being cancelled until midday at least. A spokesman for rail operator Prorail said the blizzard was making it difficult to fix problems as they occur. ‘We are trying to release the points from the snow, but as soon as they are clear, they are covered up again,’ one railway engineer said.

Eindhoven airport has also closed and the handful of incoming flights expected are being diverted to Cologne. Schiphol airport is recommending travellers check with their airline and warns there may be delays.

The KNMI weather bureau expects its code red weather warning to remain in place for the rest of the day and tomorrow morning because of the drifting snow.

Most snow – between 10 and 20 centimetres – has fallen in Twente, the eastern part of Gelderland and around Nijmegen and this will increase to around 25 centimetres before the snow stops.

The temperature is well below freezing but taking the wind chill factor into account, it could  feel as cold as -11 Celsius in places.  Wind speeds of up to storm force 8 have been recorded on the IJsselmeer and on the Wadden Sea islands.

The freezing temperatures are currently forecast to last until at least next Saturday, but there will be plenty of sunshine later in the week.

Are you making the most of the snow? Send your photos to editor@dutchnews.nl and we’ll share some of them on the website and on our Facebook page.