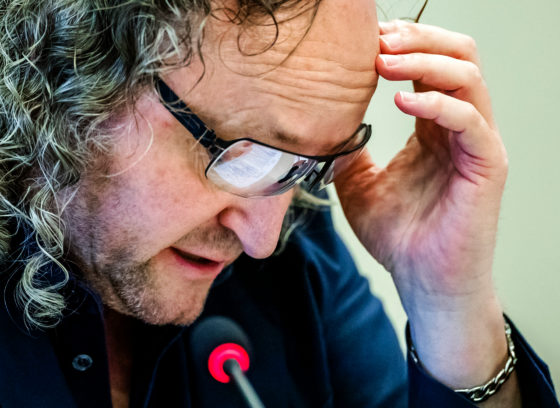 One of Geert Wilders’s most trusted colleagues in the PVV party, Dion Graus, is facing a fresh investigation into allegations that he forced his wife to have sex with his bodyguards in the parliament building and other locations.

NRC published a lengthy article at the weekend based on documents, tapes and digital material recently submitted by Graus’s ex-partner, Joyce, to the investigation team. The couple divorced in 2018 after 14 years.

Joyce first filed a complaint in January 2019 of psychological abuse against Graus, claiming he arranged sexual encounters with other men, including his bodyguards, over a period of several years, but withdrew it six months later. The incidents are alleged to have taken place in hotels, saunas, and on one occasion in Graus’s parliamentary office.

Graus, who has been an MP since 2006, denies the allegations. In taped phone calls with Joyce, published by NRC, he asserts repeatedly that the sex was consensual. Graus routinely recorded phone calls and meetings with friends and colleagues, including PVV group meetings, NRC said.

One of the two bodyguards named in the dossier confirmed to NRC that the events had taken place, while the other denied it.

Investigators are also said to be studying allegations that the 53-year-old received €125,000 in travel expenses by claiming to be living with his mother in Limburg rather than in his own apartment in Voorburg, 10km from The Hague.

Graus is a senior member of the PVV, having helped to shape Wilders’s public image when he broke away from the right-wing liberal VVD in 2004. Two years later his new party won nine seats in parliament, one of which was allocated to Graus.

A prominent animal rights campaigner, he was the architect of one of the PVV’s flagship policies during its confidence and supply deal with Mark Rutte’s first cabinet in 2010, the 500-strong ‘animal cops’ division. The plan to create a specialist police unit for animal abuse was included in the coalition agreement between the VVD and CDA, but was abandoned when the cabinet collapsed 18 months later.

In 2003 Graus faced allegations of abuse and stalking from two former partners, one of whom claimed he had grabbed her by the throat and threatened to put a gun to her head while she was pregnant. The prosecution service decided not to proceed with the case, but later said there had been sufficient evidence to bring charges against the MP.

In one of the recorded conversations with his ex-wife he said: ‘If there’s another scandal around me it’ll end my career. I’ll have to live on benefits for the next 15 years and that’s not going to happen, Joyce.’

Graus and Wilders declined to comment on the contents of the documents when contacted by NRC. Wilders’s only response came on Twitter on Saturday, when he wrote: ‘Just putting NRC in the cat litter tray. Have a good weekend!’

Graus told NOS: ‘As an MP I have the right to a private life and I choose to keep it private.’

Parliamentary chair Khadija Arib would not be drawn on whether the incidents that allegedly took place within the Binnenhof complex would be investigated further.

The public prosecution service confirmed to NOS that it had received the documents from Graus’s ex-wife, but would not comment further because it was waiting for ‘supplementary material.’