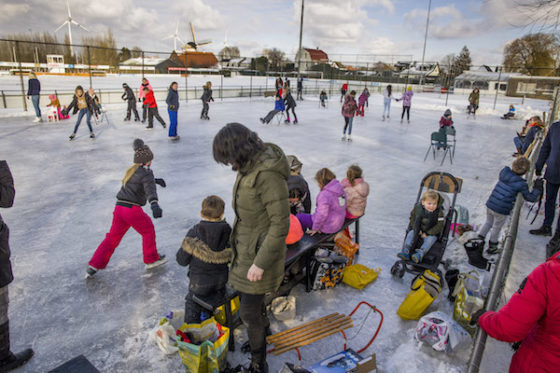 This tennis court has been turned into an impromptu ice rink. Photo: Arie Kievit ANP

This weekend, with clear blue skies and frost forecasted, thousands of people are likely to visit areas such as Steenwijkerland to skate through the picturesque canals of Giethoorn and other villages.

There the local mayor has urged people to ‘skate in your own town’ but nevertheless, officials have organised traffic wardens to direct cars and set up motorway signs warning people that it is busy.

South of Amsterdam is a network of lakes and canals and there too, officials have been making plans to deal with the crowds. ‘The whole country has ice fever, and you just have to learn to deal with it,’ a spokesman for Wijdemeren local council told website Nu.nl.

‘We are asking people not to come en mass to Loosdrecht,’ Len Veerman, chairman of the local ice club, told NH Nieuws. ‘The ice is far from trustworthy… and it is still too dangerous.’ Several people went through the ice on Thursday morning, he said.

People also sunk through the ice while skating in Groningen and Eindhoven, broadcaster NOS reported.

In Amsterdam, there was disappointment for people hoping to skate on the Prinsengracht canal, after a boat broke through the ice. The skipper was not aware that a ban on sailing has been in force in an effort to let the ice grow, council official Egbert de Vries told local broadcaster AT5.

The skipper has been fined, not for breaking the ice but for sailing the wrong way up the canal.

Weather forecasts indicate this weekend may be the last of the big freeze. On Monday, the temperature is no longer predicted to be below zero during the day, and on Tuesday the daytime temperature could hit 11 Celsius, according to the KNMI weather bureau, even though it will still be frosty at night.