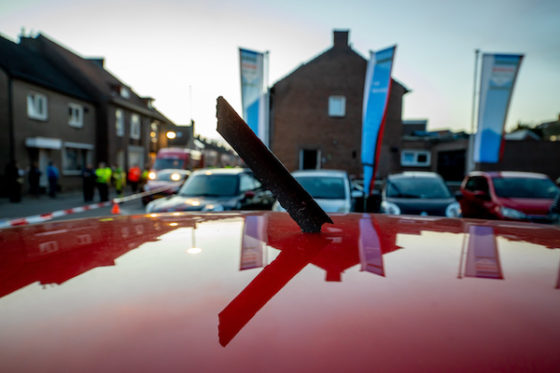 The roof of this car was pierced by a piece of metal. Photo: Jean-Pierre Geusens, ANP/HH

People living in the Limburg village of Meerssen are demanding answers after a number of ‘red hot’ aircraft parts fell from the sky, damaging cars and homes and slightly injuring one woman and a child.

The metal pieces came from a Boeing 747-400 cargo plane which had left Maastricht airport for New York just after 4pm on Saturday.

Eyewitness say they heard loud bangs and saw flames coming out of one of the plane’s left motors before running for cover as the metal parts showered the village. Several cars and roofs were damaged by the metal, which was said to be ‘red hot’ as it hit the ground.

The plane made an emergency landing at Luik in Belgium.

Airport police and the Dutch safety board OVV have now opened an investigation in an effort to establish what happened.

A spokesman for the Bermuda-based airline, Longtail Aviation, told the AD it would be speculation to try and guess what had caused the motor to catch fire and shed pieces of metal.

‘Our full attention is which those who were involved in the incident,’ an airport spokesman said on Sunday. ‘We are trying to contact the woman and the parents of the boy who were injured.’