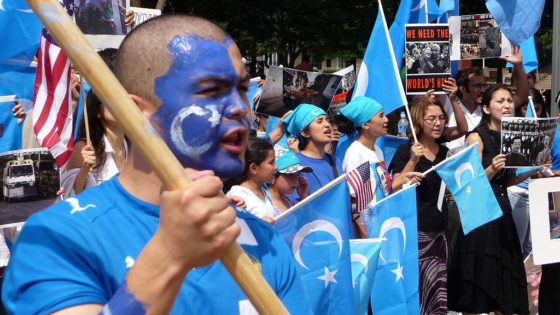 An Uighur protest in Washington DC in 2009. Photo: Malcolm Brown via Wikimedia Commons

The Dutch parliament has become the first legislature in Europe to condemn the treatment of China’s Uighur minority as an act of genocide.

Independent reports from China’s Xinjiang province suggest that around a million Uighurs are detained in camps, tortured, raped and forced to work. Uighur women are said to undergo forced sterilsation and abortion as a means of population control. The reports are difficult to verify because journalists in China operate under severe restrictions.

Beijing describes the camps as ‘re-education’ facilities for the Uighur Muslim minority to counteract terrorism in the region.

‘This is the biggest mass incarceration of ethnic minitorities since the Second World War,’ said D66 MP Sjoerd Sjoerdsma. ‘Every day this goes on is a day too many. We can’t look away.’

The vote is non-binding and the caretaker government has already said it will not adopt the term. Ministers took a similar stance in 2018 when MPs voted to treat the mass slaughter of Armenians by the Ottoman Empire between 2015 and 2017 as genocide.

Foreign affairs minister Stef Blok said only the international courts could rule on whether a country had committed genocide. ‘There is no government in the world that uses this term, because it is such a severe judgment that it needs to be thoroughly tested against all the criteria,’ he said.

Canada’s parliament voted on Monday to recognise the treatment of Uighurs in China as genocide, while on the last day of Donald Trump’s presidency, the outgoing US Secretary of State, Mike Pompeo, condemned the ‘ongoing’ genocide and ‘systematic attempt to destroy Uighurs by the Chinese party-state’.

A spokesperson for the Chinese Embassy in the Netherlands said Dutch MPs had shown ‘total disregard of facts and common sense’ and called the use of the word genocide ‘an outright lie’.

The spokesperson said: ‘The Netherlands is renowned for hosting many international law organizations, but by hyping up Xinjiang issue [sic] before the Dutch election, some of its parliament members are taking this issue as leverage for political gains, there is no respect for facts and rule of law at all.’