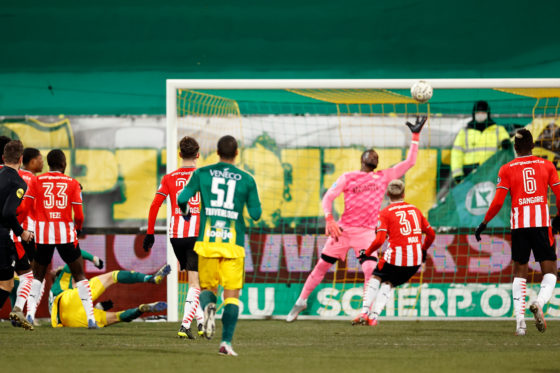 Ajax stretched their lead at the top of the Eredivisie to six points as nearest rivals PSV saw three points slip away in the last seconds of their match against ADO Den Haag.

PSV coach Roger Schmidt was unable to hide his frustration after watching Michiel Kramer snatch a late point in a match his side had dominated, registering 35 shots at goal. Donyell Malen had earlier turned around an early deficit with two second-half goals.

‘It’s actually impossible not to win this game,’ Schmidt said. ‘We gave it everything. We actually played a very good match.’

Ajax ended an unenviable streak of three league defeats in Almelo by beating Heracles 2-0. Davy Klaassen tapped in Sebastian Haller’s layoff in the 14th minute to give Ajax the lead, before the roles were reversed 14 minutes from time when Haller bundled the ball in from Klaassen’s knock-down.

AZ Alkmaar overtook Vitesse to go third as they overcame a resurgent Heerenveen, for whom Lasse Schöne started his first senior match, 19 years after joining as a youth team player. The former Ajax midfielder scored in the second half but was unable to prevent his side losing 3-1.

Vitesse’s mini-slump continued as they lost for the third time in four matches, at home to FC Twente, and lost the influential Oussama Tannane to a hamstring injury. Queensy Menig’s neat finish in the first half and a last-minute strike by Thijs van Leeuwen secured the points for Twente.

Feyenoord had to wait until the stroke of half-time to break Willem II’s defence, but Dick Advocaat’s side were much improved in the second half, scoring four goals with Bryan Linssen playing a pivotal role.

Groningen moved up to fifth as Jørgen Strand Larsen finished off a spell of penalty-box pinball for the only goal of their match against PEC Zwolle.

Utrecht stayed in contention for the play-offs with a 3-1 win over VVV Venlo, for whom Georgios Giakoumakis scored a late penalty to take his tally for the season to 22.

A last-minute strike by Ahmed Touba eased RKC’s relegation fears at the expense of bottom side Emmen, who are now seven points adrift and still looking for their first win of the season.