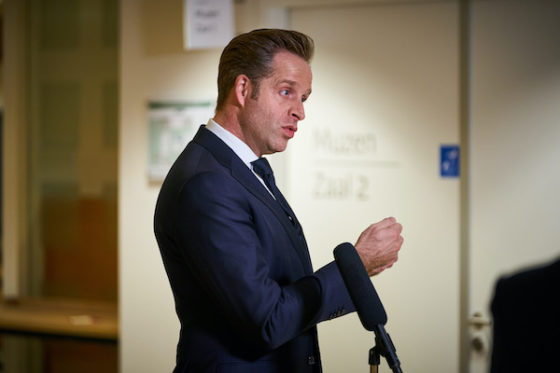 The Netherlands could have started vaccinating people against coronavirus earlier but was not agile enough when decisions were taken in November, health minister Hugo de Jonge has said, ahead of a parliamentary debate on vaccination strategy.

The Netherlands had assumed the Astra-Zeneca vaccine, which does not require storage at extremely low temperatures, would be approved first, and that the vaccination programme could have been rolled out via family doctors.

However, the Pfizer-Biontech vaccine was the first to come on the market, and that is unsuitable for use in small-scale vaccination centres.

De Jonge told MPs in a briefing on Monday evening he could have asked local health boards to prepare for the Pfizer-Biontech vaccine once that had become apparent.

‘I can now conclude that we have proved insufficiently agile to be able to accommodate the changes that have occurred quickly enough,’ he said. ‘I could have asked the health boards earlier to prepare… because of their knowledge and expertise with large-scale vaccination campaigns.’

The government has been heavily criticised for its slow approach to the vaccination programme and many other EU countries started the process before the end of the year. De Jonge earlier described the rush to start vaccinating as ‘symbolic’.

De Jonge said he hoped that the vaccination programme in the Netherlands would have been completed by the third quarter of 2021, although much depends on deliveries, he said. ‘That determines the speed at which you can vaccinate, in both the Netherlands, and the rest of Europe.’

The first Dutch person to be vaccinated will be Sanna Elkadiri, a nursing home worker from Eindhoven, the AD said on Wednesday. She will be vaccinated in Veghel, one of three locations where vaccinations will start on January 6.

MPs are due to debate the new strategy on Tuesday with opposition MPs describing the government’s approach as chaotic and confusing.

Opposition MPs are also concerned about the way the government has responded to public pressure and will now vaccinate both acute care and nursing home staff before nursing home residents, as originally planned.

Other groups, including teachers, police officers and local authority wardens have also said they should be considered priority cases.