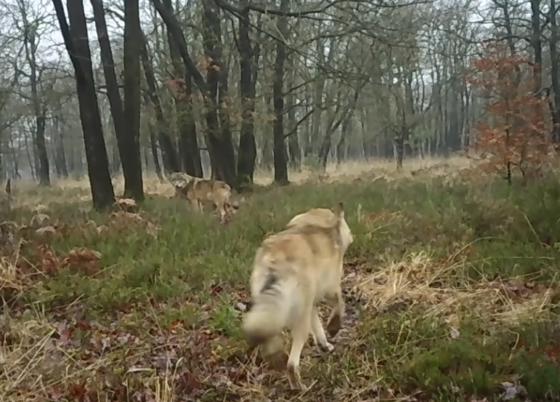 A wildlife camera has caught all eight members of a wolf pack which has made the Veluwe national park its home in an unprecedented joint appearance.

Wildlife monitoring organisation Zoogdierenvereniging, which installed the camera, said the footage shows that of the nine cubs born in 2019 and 2020 seven are still alive. That means that food is plentiful, the organisation said. Analysis of the animals’ droppings shows that their diet consists of red deer, fallow deer and young wild boar.

The presence of wolves in the Veluwe national park, which is now home to two families, is controversial.  National park director Seger Emmanuel baron van Voorst tot Voorst has said the park is too small too sustain more than a handful of wolves and that their presence threatens the ecological balance in the park.

While the Veluwe wolves eat mostly deer, a number of itinerant wolves in other parts of the country have been attacking sheep prompting calls for a cull.

In Drenthe a lone male wolf, which may be settling there, is thought to be responsible for some 17 sheep killings in the spring of last year while four highland cattle calves roaming on a nature reserve near the Brabant village of Someren also appeared to have been killed by wolves.

Farmers whose livestock can be proved to have been killed by wolves can get compensation because the wolf is a protected species. They can also get subsidies to install high electric fences to keep their livestock safe.

In Friesland there is now a move by a group of sheep farmers to build a 150 kilometre electric fence around the province to keep out wolves.