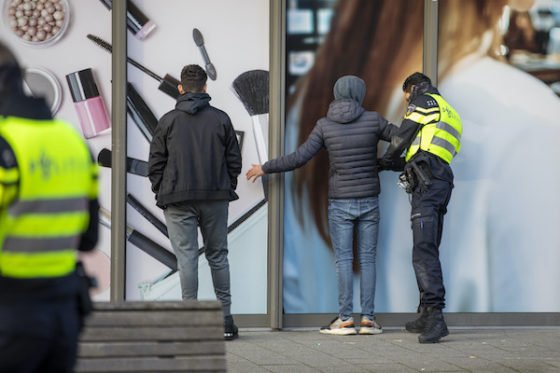 The fourth night of curfew in the Netherlands passed off relatively peacefully, police and other officials said on Tuesday evening, following three days of riots.

Although there were a handful of arrests, there were no serious incidents, and television footage showed a heavy police presence on the streets.

‘We are on top of the situation and we are talking to people,’ police chief Willem Woelders told current affairs show Nieuwsuur. ‘There has been no reason to bring in the riot police or other forces and it is different to yesterday.’

There were 33 arrests in Rotterdam, mainly for illegal assembly and being unable to show ID, broadcaster NOS reported. In the district of Osdorp in Amsterdam, riot police were able to disperse a group of youngsters who had been lighting fireworks without any problems, NOS said.

In Maastricht and Den Bosch, groups of football fans took to the streets to ‘protect their cities against rioters’, but, it later transpired, were not sanctioned to patrol by police, as had been reported on social media.

In the event, it remained quiet in most places, and groups of youngsters dispersed when ordered to do so, news website Nu.nl said.

Earlier in the evening, various mayors had called on parents to keep their children home amid fears of further trouble. The youngest of the 184 rioters arrested on Monday evening was 14.

MPs will debate the riots on Wednesday, amid calls from far right parties for the army to be put on standby.