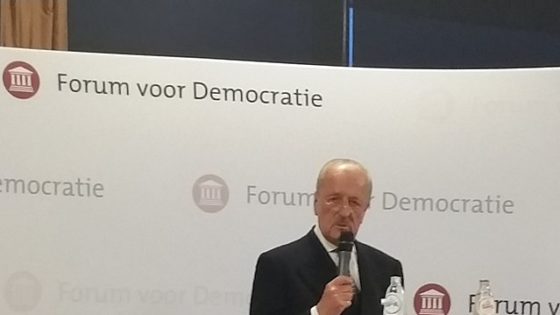 Just over a week after saying he would stand for election after all, former Forum voor Democratie MP Theo Hiddema has again said he will not be included in the party’s candidate list for the March 2021 general election.

Hiddema told broadcaster NOS that he wants to be removed from the list because the party has taken a populist approach by focusing its campaign on opposing the government’s coronavirus strategy.

The new approach is one of ‘almost religious fervour’, Hiddema told the broadcaster. ‘We did not become FvD members because of our expertise in pandemics,’ he said.

It is unclear if Hiddema has also sent the note to party leader Thierry Baudet, NOS said.

Hiddema quit parliament in the wake of the bitter infighting that engulfed Forum voor Democratie in November and said on December 24 he was prepared to stand again as a candidate for the party in March after all.

The 76-year-old lawyer vacated the far-right party’s second seat on November 24, during a week in which Thierry Baudet resigned as leader and party chairman and dozens of its senators and provincial assembly members quit the party.

Hiddema said he felt ‘politically unfit for work’ in his resignation letter, which was read out by parliamentary chair Khadija Arib. But he said in December Baudet’s personal overtures since he was reappointed as leader, after winning a referendum of party members, had convinced him to stand again.

According to the latest opinion polls FVD is on course to win three or four seats in the election next March. It currently holds two but at the height of its popularity 18 months ago the party was projected to take more than 20.

This weekend, Baudet published a string of statements on Twitter in which he said that the concept of ‘health’ was a totalitarian one.