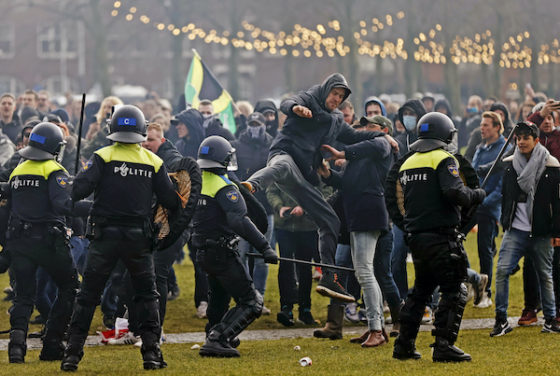 Riot police used water cannon and horses to break up an illegal demonstration on Amsterdam’s Museumplein on Sunday afternoon.

The demonstration had been called by a group calling itself Nederland in Verzet (the Netherlands resists) but had been banned by mayor Femke Halsema because of fears that coronavirus measures would not be kept.

An alternative location, and a 500 limit on the number of demonstrators, was rejected by the organisers, who then cancelled the entire event.

However, despite appeals not to do so, hundreds of people still came to Museumplein to make their voices heard. According to website Nu.nl, about 1,000 people had gathered on the square by around 2pm, when the demonstration should have started. Some were carrying Dutch flags, others placards stating ‘stop the lockdown’, ‘for freedom’ and ‘media=virus’.

Others hugged each other and chanted ‘we are the Netherlands’, the Parool reported.

Despite being warned to leave several times, many demonstrators refused to budge, and the mayor then evoked her emergency powers to end the protest.

By around 5pm, calm had returned to the Museumplein although pockets of demonstrators remained on the surrounding streets and there was still a heavy police presence.

Police have not yet said how many, if any, arrests were made.