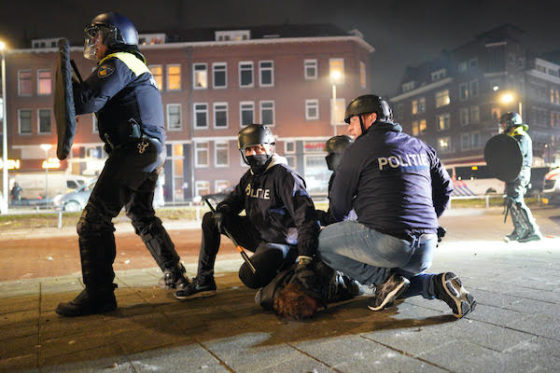 Riot police were called out to cities across the Netherlands on Monday evening in a third night of rioting following the introduction of a curfew to try to stop the spread of coronavirus.

By the time things had quietened down, 151 people had been arrested, police said.  Police chief Willem Woelders told current affairs programme Nieuwsuur: ‘Things were relatively quiet until 7.30pm, but then all hell broke loose.’

In Haarlem and Rotterdam police threatened to use tear gas to break up the crowds, and extra riot police were drafted in, Woelders said. In Amersfoort, fireworks were thrown at police and there were also problems in Den Bosch, where a group of up to 150 youngsters had gathered in defiance of the 9pm curfew, and a Jumbo supermarket was plundered.

In Rotterdam, mayor Achmed Aboutaleb evoked his emergency powers and called in riot police with water cannon after trouble broke out in the south of the city. There were some 60 arrests.

RTV Oost reported that gangs of youngsters were running through the centre of Zwolle and there were clashes with police in the north of Helmond. In Zeeland province, six people were arrested in Goes and Kattendijke after calling on people to riot via social media.

Police in Noord-Holland province said they had arrested five people who had called online for riots in Purmerend, Hoorn and Alkmaar. In Amsterdam, there were at least nine arrests after trouble erupted in the east of the city.

In Gouda, the mayor also evoked his emergency powers after several cars were set on fire. There were also arrests in Geelen, in Limburg, including several minors, police said.

Monday evening’s trouble follows disturbances on Sunday as protestors staged demonstrations against the coronavirus rules in Amsterdam and Eindhoven.

Up to 300 people were arrested as riot police were drafted in to break up the crowds. In Eindhoven, station shops were looted and police used tear gas in an effort to disperse the demonstrators.

On Saturday night, the first day of the 9pm curfew, there were disturbances on the former island of Urk, where protesters set fire the the coronavirus testing centre, and in Stein in Limburg.

Prime minister Mark Rutte  described the violence that accompanied anti-lockdown protests in some Dutch towns and cities on Sunday as ‘unacceptable’.

Rutte said 99% of people were complying with the stricter new rules, including the 9pm curfew that came into force on Saturday.

He singled out the vandalism in Amsterdam and Eindhoven, as well as Enschede where a hospital building came under attack, for special condemnation. ‘Any normal person will look at this with disgust and ask themselves what possessed these people,’ Rutte said. ‘This has nothing to do with protesting: it is criminal violence and that is how we will treat it.