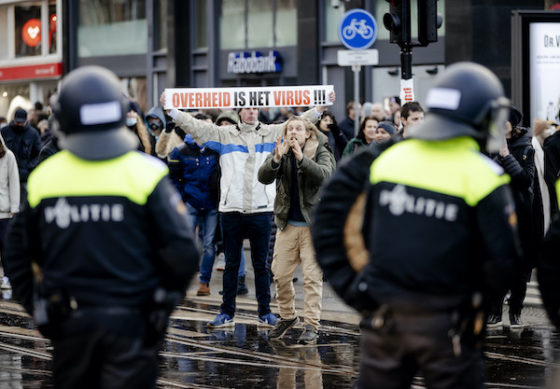 Police arrested a total of 143 people at Monday’s illegal demonstration against the government on Amsterdam’s Museumplein on Sunday, 15 of whom have been held overnight.

Riot police used water cannon and horses to break up the protest, which had been banned by mayor Femke Halsema because of fears that coronavirus measures would not be kept.

An alternative location, and a 500 limit on the number of demonstrators, was rejected by the organisers, who then cancelled the entire event.

Officials estimate around 2,000 people came to the demonstration, despite being urged to stay home. Some were carrying Dutch flags, others placards stating ‘stop the lockdown’, ‘for freedom’ and ‘media=virus’.

Officials also say that a group of people at the protest, up to 250 in some estimates, were deliberately out to cause trouble. Some threw rocks and fireworks at the police, while others were carrying sticks and wearing protective gloves worn by fighters.

Despite being warned to leave several times, many demonstrators refused to budge, and the mayor then evoked her emergency powers to end the protest.

By around 5pm, calm had returned to the Museumplein although pockets of demonstrators remained on the surrounding streets and there was still a heavy police presence.

Meanwhile, the AD reports that the health inspectorate is looking into the case of an elderly man from Limburg who had come to the demo and claimed to be a homeopathic doctor.

He told local broadcasters that there are no coronavirus patients in intensive care and people were being murdered via the vaccination programme. He also said doctors are faking everything for €20,000 per patient.