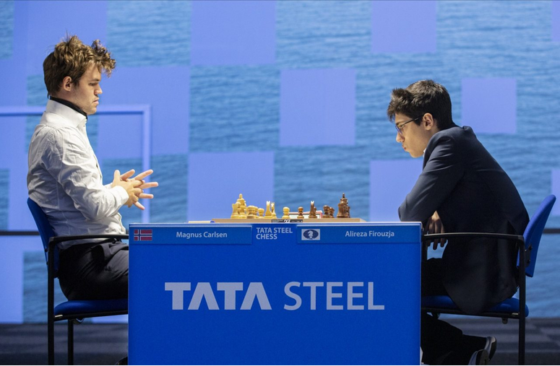 The annual Tata Steel chess tournament, which is currently being held at Wijk aan Zee, has been given an unexpected boost by the Netflix mini series The Queen’s Gambit but at the same time highlights the lack of female top contenders in the circuit.

The tournament (formerly the Hoogovens chess tournament) features some of the best players in the world but women are rarely seen and none are competing this year.

The Queen’s Gambit is set in the 1960s and tells the story of orphan Beth Harmon who learns to play chess at the age of six and who reaches the pinnacle of chess fame, the only woman to do so at the time.

Bianca de Jong-Muhren, chairwoman of the Dutch chess association, says said the series has been a huge boost for online chess and that the sale of physical chess board had soared as well.

‘And we have our own Dutch Beth Harmon in the shape of 14-year-old Eline Roebers who bagged the online world title [under 14s] last year,’ De Jong-Muhren told broadcaster NOS.

World champion and Tata tournament participant Magnus Carlsen, who said the series features games he had never seen before, agreed that the world of chess is dominated by men.

‘It’s not easy for women to get a look in. I think we should stop having separate tournaments for men and women. Men and women are equal and there is no reason why they can’t compete together,’ he told the broadcaster.

Carlsen himself has also been instrumental in popularising chess in the Netherlands, particularly among teenagers.  The number of KNSB junior members has risen from  6,200 to 17,600 with the number of girls joining the chess organisation quadrupling.

The current tournament, which ends on January 31, is being played without an audience to prevent the spread of coronavirus but can be followed online .