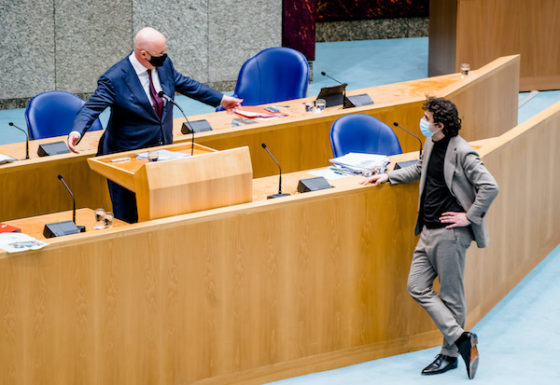 A majority of MPs are set to back the government’s plan to bring in a curfew this weekend, but only if the starting time is moved up to 9pm.

A proposal by the D66 Liberal democrats, who were known to oppose the idea of a curfew in principle, will win the support of all four coalition parties plus the Socialists and 50Plus, political commentators said.

The vote on the motion still has to be taken, but there is a clear majority in favour, news website Nu.nl said.

Prime minister Mark Rutte had indicated that the deadline could be pushed back slightly, but to no later than 9pm.

MPs spent most of Thursday debating the caretaker cabinet’s decision to introduce a curfew in the Netherlands in an effort to keep more virulent strains of coronavirus at bay.

A further, 5,857 new infections were reported to the public health institute RIVM in the 24 hours to Thursday morning, a rise of 260 on Wednesday’s total, and further evidence that the current restrictions are not yet having sufficient impact.

January 20 press conference: what you need to know

The introduction of a curfew is the best way to reduce the number of infections taking place at home, Rutte said. The only alternative, he said, was to advise everyone to stay indoors, which would be even more far reaching.

During the debate, a number of MPs raised concerns about the impact of a curfew on people who are already feeling more lonely and depressed because of the current restrictions.

‘We need human contact,’ said Esther Ouwehand of the pro-animal PvdD. Youngsters have already been driven to suicide by social distancing, she said, and asked why no behavioural experts had been brought in to help assess what could be done.

Others said the government had failed to properly enforce the rules already in place and had not been quick enough off the mark with the vaccination programme.

Justice minister Ferd Grapperhaus told MPs the list of exceptions to the curfew had been deliberately kept as short as possible to ensure as many people as possible comply.

The fine for breaking the curfew without a valid reason will be €95, but people who forge an employers declaration stating they have to be out late will get a higher fine, and a criminal record, he said.