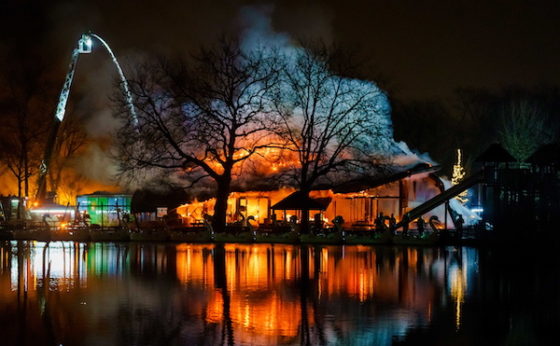 Firefighters try to put out the blaze in the Rotterdam pavilion. Photo: Marco de Swart EPA via ANP

Rotterdam police say they have arrested a 14-year-old youth in connection with the fire which destroyed a theatre in the Plaswijckpark in Rotterdam, but that the rest of Wednesday evening passed off peacefully.

The youngster was picked up after a video was circulated on internet, allegedly showing the blaze being started. The Plaswijckpark is a small-scale amusement park catering to young children, and has some live animals as well as attractions. More arrests have not been ruled out.

Elsewhere in the city, there were 25 arrests, mainly before the 9pm curfew and mostly for breaking coronavirus measures and failing to show ID when asked, police said.

Police chief Willem Woelders told current affairs show Nieuwsuur that Wednesday evening had been peaceful, thanks to the heavy police presence. There were no major incidents and police nipped any potential situations in the bud immediately, he said.

However police did arrest around 20 people nationwide for calling for riots on social media, Woelders said. Perpetrators can face jail terms of up to five years.

Limburg police also made one arrest for incitement, while two men, aged 23 and 23 were arrested in Utrecht on similar charges.

In Leiden, three teenagers aged 15 and 16 were arrested for carrying white spirit and explosives and police have appealed for more information.

In Nijmegen a 26-year-old man and 19-year-old woman were picked up, apparently while filling bottles with petrol. They had also made their intentions to riot plain on social media, police said.

The public prosecution department says that simply circulating a message calling on people to riot can be considered a criminal offence. ‘Sharing this sort of message can in concrete cases be seen as incitement,’ a spokesman told local broadcaster Omroep Brabant.

Meanwhile, four people whose photographs had been circulated by the police for their role in the riots in Amsterdam on Sunday have all come forward, police said.