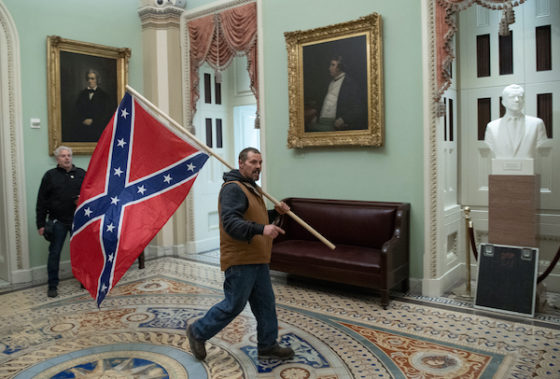 Supporters of US president Donald Trump protest in the US Capitol. Photo: Saul Loeb AFP

Dutch politicians and leader writers have been responding to the overnight violence in Washington and the death of at least one person as Trump supporters stormed the Capitol.

Prime minister Mark Rutte said on Twitter while the Capitol was still under siege that events unfolding in the US were ‘horrible’.

Dutch foreign affairs minister Stef Blok has shared his concerns about events in Washington with the US ambassador to the Netherlands Pete Hoekstra, broadcaster NOS reported.

‘Parliamentarians should be able to do their jobs independently and in safety,’ Blok said. ‘The storming [of the Capitol] was tragic and should not have happened.’ Blok called for an end to the uprising and urged people to respect the results of the election.

Hoekstra, who was appointed to the job by Trump and was a close ally, issued a short statement saying the events in Washington ‘broke my heart’.

For 18 years, the United States Capitol was my workplace. It breaks my heart to see what has transpired there today. My thoughts & prayers are with my former colleagues on the Hill…and with America.

The NRC said in an analysis that ‘the chaos around the Capitol and the result of the senate races in Georgia lay bare the divisions with the Republican party’.

And even though vice-president Mike Pence confirmed Biden’s victory, the ‘Trumpian revolution within the Republican party has not yet been put out,’ the paper said.

D66 leader Sigrid Kaag said the violence in Washington should be both a ‘warning and a lesson’.

‘Four years of poisonous words resulted in drawn guns and fatalities in the US parliament,’ she said. This is, she said, ‘the sad result of a policy of hatred, a policy that pits people against each other and exploits resentment and unease for personal  gain.’

GroenLinks leader Jesse Klaver tweeted that the events in Washington are a reminder of how vulnerable democracy is, and how important it is to ‘solve differences of opinion peacefully’.

However, his tweet was later savaged by the party’s youth wing, who stated: ‘This is not about a difference of opinion. This is a violent, fascist coup and we should condemn it.’

Far right MP and PVV leader Geert Wilders, a major supporter of Trump, said the footage from the US is ‘shocking’. ‘The outcome of democratic elections should always be respected, whether you win or lose,’ he said on Twitter.

Forum voor Democratie leader Thierry Baudet, also a major Trump supporter, reportedly retweeted an old message praising the outgoing president at the height of the troubles, but later deleted it.

In case you missed it: last night, just as shots were being fired in Congress and things were spiraling out of control, Thierry Baudet made a point of retweeting this. Genuinely amazing. I had to check three times that there wasn’t something wrong with my phone. pic.twitter.com/QOj95ZLy6O