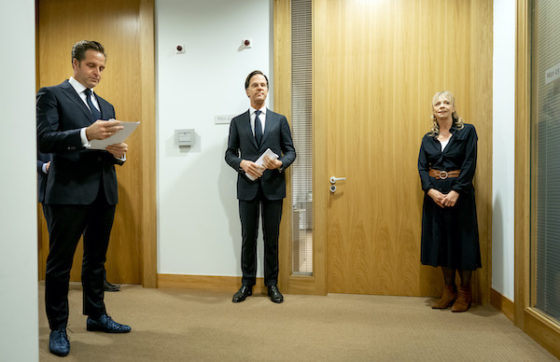 As widely predicted, the Dutch government is extending the lockdown until February 9, and is also considering the introduction of a curfew.

‘Everyone will understand we have no other choice,’ prime minister Mark Rutte told a press conference on Tuesday evening. ‘The figures are not going down sufficiently and now we have to deal with the British variant of the virus. What we see coming out of Britain and Ireland is heartbreaking and alarming.’

In addition to extending the lockdown, ministers are looking at what else can be done to further reduce the infection rate, Rutte said.

One option is to bring in a curfew, and the Outbreak Management Team – the cabinet’s main coronavirus advisory group – has been asked to report back on that specific option. ‘We do think it could be an effective measure to limit infections via the home,’ Rutte said.

Schools and daycare centres will remain closed and secondary school pupils who can attend lessons will now have to keep 1.5 metres from each other, where possible, Rutte said.

The government is also looking into the option of opening primary schools and daycare centres on January 25, but that decision will not be taken until next week at the earliest, Rutte said.

There are now 100 cases of the British variant of the virus known in the Netherlands, health minister Hugo de Jonge told reporters. ‘We have to make sure that this figure stays as low as possible,’ he said.

To this end, several places where the infection rate is extremely high, including the Charlois district of Rotterdam, Dronten and Bunschoten, near Amersfoort, will also appeal to all residents to undergo a test, De Jonge said.

Lansingerland in Zuid-Holland said on Monday it plans to test around 60,000 people for coronavirus following an outbreak of the British strain of the disease at a primary school last month.

De Jonge urged everyone who has symptoms to have a test, as well as people who are contacted as part of the contact tracing programme.  ‘There are 376 locations now where people can take a test,’ De Jonge said. ‘There is capacity to carry out 100,000 tests a day, and only 50% is being used.’

De Jonge, who has been heavily criticised for the slow start to the Dutch vaccination programme, also said some 35,000 nursing staff have already been vaccinated, and 200,000 appointments have been made.

By the summer, everyone over the age of 60 should have been vaccinated, De Jonge said. By the autumn, the entire population should have had the jab.

Rutte also criticised the number of people going on foreign trips and said that people should stay in the Netherlands until April, unless they have a serious work or family reason to travel. Describing holidaymakers as ‘very anti-social’, Rutte said: ‘every foreign trip is a risk for yourselves and everyone around you’.

Rutte also said there are no indications as yet that the general election, planned for March 17, would not go ahead.

Research published earlier on Tuesday by broadcaster NOS shows that almost four in five people consider the decision to extend the lockdown to be acceptable, and that 72% of people support the government’s strategy for dealing with the virus.

The survey also showed the willingness to be vaccinated has gone up again to 82%. In total, 63% say they will certainly be vaccinated, up from 43% two months ago.

People have most confidence in Diederik Gommers, acute care chief and a member of the Outbreak Management Team. Second on the list is hospital chief Ernst Kuipers and third the regional health boards. Both Gommers and Kuipers have criticised government policy and called for tougher measures.