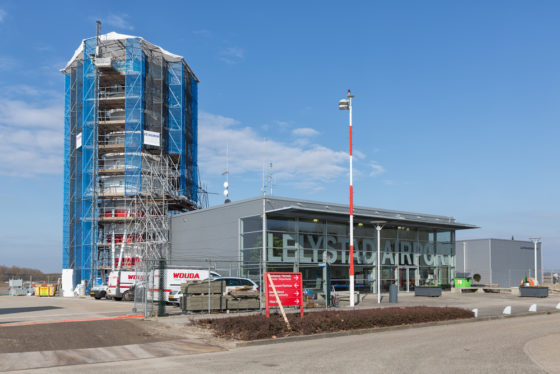 Building under way on the control tower. Photo: Depositphotos.com

MPs have agreed to leave the issue of opening Lelystad airport to commercial traffic to the next government.

The decision means the plan to start commercial flights to and from Lelystad later this year may not now happen, given that it could take months to form a new coalition after the March vote.

Infrastructure minister Cora van Nieuwenhuizen told television programme Buitenhof on Sunday that as far as she is concerned, the airport can open as planned, even though air travel has collapsed because of the coronavirus pandemic.

MPs, however, have decided to brand the issue ‘controversial’, which means the caretaker cabinet cannot press on with the project.

The cost of rebuilding the airport, which was used by flying schools and private aircraft, has so far reached €200m.

The government had hoped to open Lelystad to holiday traffic in 2020 and so allow Schiphol to focus on more lucrative intercontinental flights, but that was delayed by a variety of problems, not least of which was approval from Brussels.

The expansion plans have also led to major protests by people who will be affected by low-flying planes. In addition, in 2019 it emerged that the noise calculations for local residents were wrong and that people will suffer far more aircraft nuisance than expected.