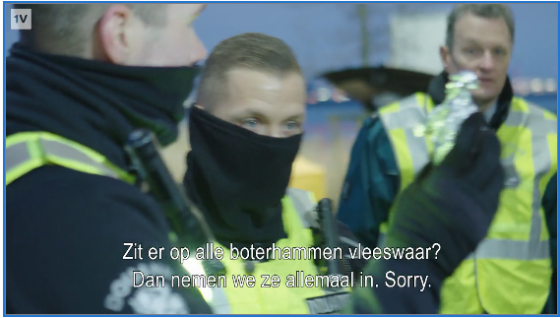 ‘Is there meat on all the bread?’ asks the official

British newspapers are up in arms about the way Dutch customs officials are confiscating food from truckers arriving at Hoek van Holland, describing them as ‘gloating for confiscating a ham sandwich’.

EU rules ban the import of meat and dairy products into European countries from abroad, and those measures now apply to lorry drivers from Britain. Both the Dutch and British government have issued warnings to travellers pointing out that they should ‘use, consume, or dispose of’ any illegal items before crossing the border.

The television footage showing the sandwich being confiscated comes from current affairs show EenVandaag. ‘Welcome to Brexit sir, I’m sorry,’ one smiling customs official tells the bemused lorry driver, who is also laughing, as he takes his lunch, wrapped in silver foil.

The pro-Brexit Daily Mail says officials have ‘paraded a stash of food including muesli seized from Britons crossing the EU border after confiscating a ‘small mountain’ of items since the new Brexit rules came into force on January 1.’

The paper goes on to refer to the Netherlands as a ‘drugs smugglers paradise’ while commenters remind the Dutch about how the British airdropped food while they were starving towards the end of World War II.

The Mirror, Sun and even the Guardian have carried reports about the ham sandwiches being confiscated.

The sandwich row is not the first impact of the changing relationship between the Netherlands and Britain on the man in the street.

Earlier, Dutch retailer Dutch Bike Bits said it will no longer ship to the UK because Britain is asking overseas firms to apply and collect British taxes on behalf of the British government when selling to UK customers.

Mail and shipping companies such as TNT and UPS have also brought in extra fees for sending packages to and from Britain.