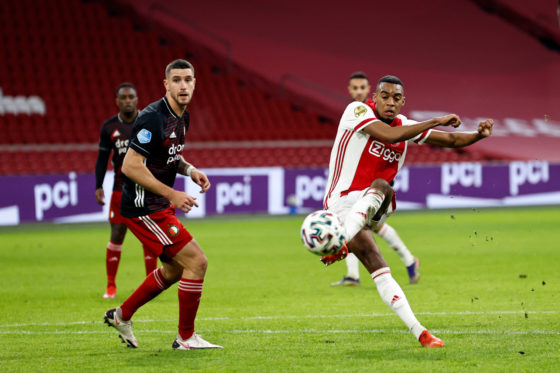 Ajax retained their three-point lead in the Eredivisie as they overcame Feyenoord in their second big domestic clash in as many weeks.

Ryan Gravenberch scored the only goal of the game after 22 minutes with a left-foot shot after side-stepping Marco Senesi. Feyenoord had chances to equalise, notably in injury time when Leroy Fer had a shot well saved by Andre Onana and Luis Sinisterra’s header cannoned off the bar.

Ajax coach Erik ten Hag said his players had shown character to hold off a second-half fightback by Dick Advocaat’s side. ‘I have to compliment my lads on the way they survived. They fought for every metre and in the end came away with the win,’ he told NOS.

Advocaat also praised his players’ tenacity: ‘We had chances, a shot off the bar, one just wide and a pretty decent keeper who kept a few out. We’ve shown we can compete against a good team.’

The result leaves Feyenoord in fourth place behind Vitesse Arnhem, who completed their best-ever first half of a season with a 4-1 victory at bottom club Emmen. Thomas Buitink and Oussama Tannane put Vitesse 2-0 ahead inside 10 minutes, with Armando Broja and Patrick Vroegh adding to the score in the second half.

PSV Eindhoven prevailed in an eight-goal thriller in Het Kasteel to move up to third, a point behind Vitesse. Bryan Smeets gave Sparta an early lead with a thundering shot in the fourth minute, but the arrival of Donyell Malen as a substitute just before half-time for the injured Cody Gakpo turned the match in the visitors’ favour.

PSV survived a nervous last 15 minutes as Sparta came back from 4-1 down to 4-3, before Malen’s second goal of the game secured the points in injury time.

AZ Alkmaar are still in touch with the leaders after coming from behind to snatching a late win against ADO Den Haag. Substitute Zakaria Aboukhlal scored both AZ’s goals in the last 20 minutes, the winner a low drive that crept in off the post.

Groningen came back from 2-0 down at home to claim a share of the spoils against FC Twente in the battle of sixth versus seventh, while fellow northerners Heerenveen fell further behind as they drew 1-1 with VVV to stretch their winless run to 10 games.

Fortuna Sittard’s recent revival continued with their third win in four matches at PEC Zwolle. Zian Flemming broke the deadlock on 57 minutes when he found the top corner from 20 metres, before Mats Seuntjes made sure when he ran along a  just before the end.

The relegation clash between RKC Waalwijk and Willem II ended in a 1-1 draw, lifting the Tilburg side above 17th-placed ADO on goal difference, while Utrecht and Heracles also shared the points in a game where both teams scored from goalkeeping blunders.