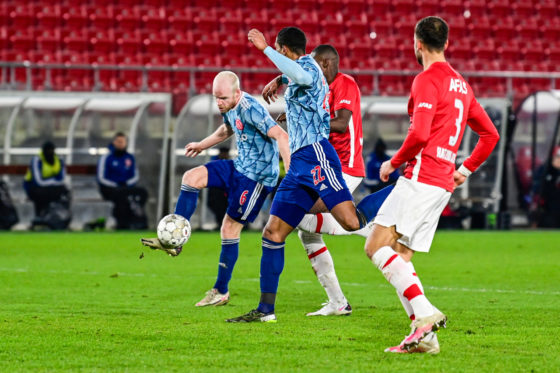 Ajax emerged as the big winners from ‘Super Sunday’ as they beat AZ Alkmaar 3-0 to go seven points clear in the Eredivisie.

PSV Eindhoven went down 3-1 to Feyenoord in De Kuip, but stay in second place after Vitesse Arnhem drew at home with RKC Waalwijk on Saturday, while Feyenoord displaced AZ in fourth spot.

Brazilian winger Antony put Ajax 1-0 ahead after 14 minutes after Davy Klaassen’s stepover made space for Sebastian Haller to play the ball into Antony’s path. Both sides had good chances before Klaassen rounded off a breakaway move with a low volleyed drive, while David Neres added a third in injury time.

Coach Erik ten Hag was determined to keep his feet on the ground after seeing his team win five out of six league games in 2021. ‘You can’t win anything in January,’ he told NOS. ‘There’s a long way to go, and to use a cycling term, Paris is still far away.’

Feyenoord gave PSV a lesson in counter-attacking as they went 3-0 up in the first half. Steven Berghuis scored the pick of the goals, an angled drive that curled in at the far post, on 26 minutes after Mark Diemers had given Dick Advocaat’s side an early lead.

Bryan Linssen then beat the offside trap by millimetres to put away the third after 40 minutes. PSV pulled one back early in the second half when Ibrahim Sangaré headed in Philipp Max’s free-kick, but despite dominating possession they were unable to close the gap further.

Vitesse’s title challenge is fading fast after they dropped five points in their last two games. Riechedly Bazoer put them ahead against RKC with a sublime curling shot after 71 minutes, but just four minutes later Richard van de Venne replied to earn a point for the Brabant side.

Georgios Giakoumakis scored his fifth goal in a week for VVV after putting four past Vitesse, but was unable to stop his team going down 3-2 at Fortuna Sittard in the Limburg derby.

Another team in good form since the turn of the year, Heracles, stopped Groningen rising to joint fifth as Delano Burgzorg scored for the fourth match in a row to claim a 1-0 win.

Heerenveen were unable to build on the momentum of their 3-0 midweek win over Feyenoord as they drew 0-0 in Enschede. Utrecht’s three-match winning run came to an end as they snatched a late point at home against PEC Zwolle, Hidde ter Avest heading in the equaliser in the sixth minute of injury time.

At the bottom of the table Emmen are six points adrift after losing 2-0 to their closest rivals, Willem II. The Tilburgers, who parted company with coach Adrie Koster at the start of the week, moved above ADO Den Haag after the latter drew 1-1 with Sparta.