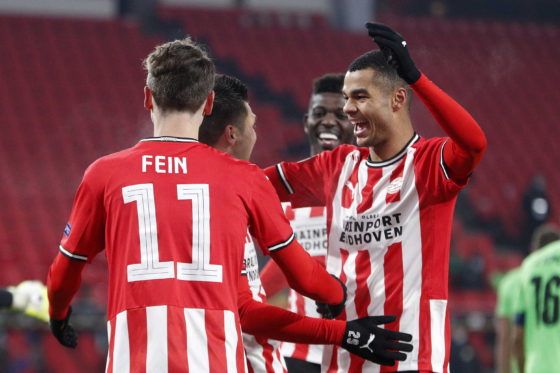 PSV Eindhoven and Feyenoord overtook Vitesse Arnhem with hard-fought wins on Sunday to put the traditional ‘big three’ at the top of the Eredivisie.

PSV overcame Utrecht thanks to two flashes of brilliance in the first half by Donyell Malen and Mohamed Ihattaren. First Malen flicked Mario Götze’s cross in behind his standing foot, before the striker set up Ihatarren to curl a shot over Maarten Paes from the edge of the area.

Ihattaren, who was demoted to the bench earlier this season by Roger Schmidt as he struggled with form and fitness, said his first goal in nearly a year had boosted his confidence. ‘My smile is back. It was a great moment and a relief,’ he told NOS.

Feyenoord took more than an hour to break down a stubborn VVV Venlo. Jens Toornstra broke the deadlock with a crashing shot and added the third eight minutes later, with Steven Berghuis’s first goal in six matches sandwiched in between.

Vitesse dropped points for the second week running as they drew 1-1 at home with Heerenveen. Oussama Darfalou opened the scoring in a goalmouth scramble after 39 minutes, but shortly after half-time Sherel Floranus found the net after Remko Pasveer had parried two shots.

Ajax are three points clear at the top following a straightforward 4-0 win over PEC Zwolle that featured Klaas-Jan Huntelaar’s 150th goal in the Eredivisie. The striker started a match for the first time this season and took just seven minutes to find the net when he headed in Antony’s cross.

The bottom of the table clash between Emmen and ADO Den Haag ended in a draw that suits neither side. ADO took an early lead when Vicente Besuijen tapped in from close range, but despite improving in the second half Emmen were unable to add to Miguel Araujo’s 72nd-minute equaliser and are still seeking their first win of the season.

AZ Alkmaar ended a miserable week on a positive note with a 3-1 away win in Enschede. The team that lost its manager Arie Slot at the weekend and its place in the Europa League on Thursday went ahead with a Teun Koopmeiners penalty and added a second before half-time from Yukinari Sugawara.

Danilo pulled one back from the spot for Twente midway through the second half before Koopmeiners restored the advantage with a free kick.

Sparta continued their recent good form by recording their first win in Tilburg since 1992. Lennart Thy opened the scoring after five minutes from a corner before Deroy Duarte struck twice either side of half-time.

Groningen won their third match in a row to move into fifth place, overcoming RKC with goals from the in-form Ahmed Al Messaoudi and Daniël van Kaam, while Heracles’s slide down the table continued as they lost 2-1 at home to Fortuna, who managed their first away win in 28 attempts.