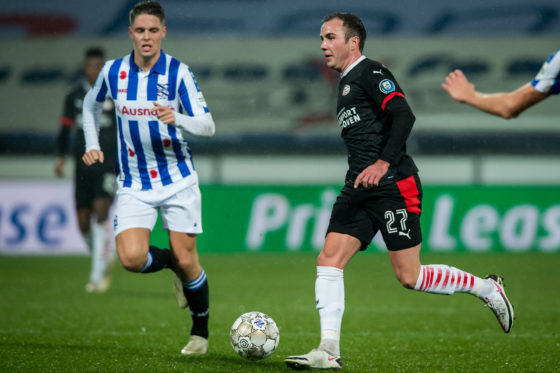 Mario Götze (right) scored the opener but PSV had to settle for a point. Photo: ANP/Cor Lasker

Ajax remain two points clear in the Eredivisie after their rivals all failed to win on a weekend that had more in common with Valentine’s Day than Sinterklaas with eight players receiving red cards.

The league leaders were well beaten by FC Twente in the ArenA as two goals by Queensy Menig, both times cutting in from the right before unleashing a curling shot, capped a well organised performance. Menig’s winning goal came seven minutes from time after Dusan Tadic had equalised for Ajax from the penalty spot.

As the final whistle blew in Amsterdam, Vitesse were poised to go back to the top of the table as they led 1-0 at half-time in Zwolle courtesy of an early strike by Oussama Darfalou.

But the Gelderland side fell apart in the last half-hour following the sending-off of Idrissa Touré for a heavy challenge. PEC’s Jesper Drost immediately profited as he tapped in the resulting free-kick from close range, before Mike van Duinen scored the winner from the penalty spot after being bundled over by Matús Bero.

That gave PSV the chance to overtake Vitesse on Sunday, but Roger Schmidt’s side had to settle for a point in an eventful match in Heerenveen. The visitors went ahead in the first half thanks to a sublime finish from Mario Götze before Heerenveen turned the game on its head in the second half with goals from Henk Veerman and Mitchell van Bergen.

Joël Piroe rescued a point for PSV in injury time, but there was time for one last twist as referee Bas Nijhuis awarded Heerenveen for handling in the area. However, the decision and a red card for the offender, Ibrahim Sangaré, were reversed after the VAR panel spotted Veerman standing fractionally offside.

Feyenoord squandered a chance to close the gap to two points as Heracles held Dick Advocaat’s side to a 0-0 draw in De Kuip. Top scorer Steven Berghuis started the match on the bench at his own request after complaining of fatigue, but neither his introduction after 62 minutes nor the sending-off of Heracles’s Sinan Bakis shortly afterwards could turn the game in Feyenoord’s favour.

AZ Alkmaar suffered their first defeat of the season barely 24 hours after their manager, Arie Slot, was sacked for speaking to Feyenoord about taking over from Advocaat, who is retiring at the end of the season.

Teun Koopmeiners gave the Cheeseheads a half-time lead against Groningen, but in a bad-tempered game both Fredrik Midtsjø and Brono Martins Indi saw red in the second half as Groningen’s Ahmed El Messaoudi turned the game around with two goals in five minutes.

Fortuna Sittard claimed their first win of the season with a convincing first-half display against Willem II. Lisandro Semedo, Sebastian Polter with a penalty and Zian Flemming gave the Limburg side a healthy lead at the break, but they contrived a nail-biting finish as Vangelis Pavlidis and Jan-Arie van der Heijden reduced the deficit. The dismissal of Pol Llonch two minutes before the end took the wind out of the Tilburgers’ sails.

Emmen are rooted to the foot of the table after going down to their sixth straight defeat at Sparta, who climbed into the top half of the table with a first-half goal from Deroy Duarte and an outstanding strike by Abdou Harroui.

Their next opponents, ADO Den Haag, opened up a three-point gap at the bottom by claiming a point at Utrecht, who had Adrian Dalmau sent off after 65 minutes for a second yellow card. Utrecht were leading 1-0 at that point through defender Justin Hoogma, but conceded a late equaliser when Michiel Kramer crashed in from close range.

RKC Waalwijk came from 2-1 down at home to VVV Venlo to snatch a valuable 3-2 win as Lennerd Daneels fired in a thundering diagonal shot three minutes from the end. VVV’s Georgios Giakoumakis scored his 10th of the season from the penalty spot, but the pivotal moment was arguably the dismissal of Roy Gelmi of VVV 10 minutes into the second half for his second yellow card.