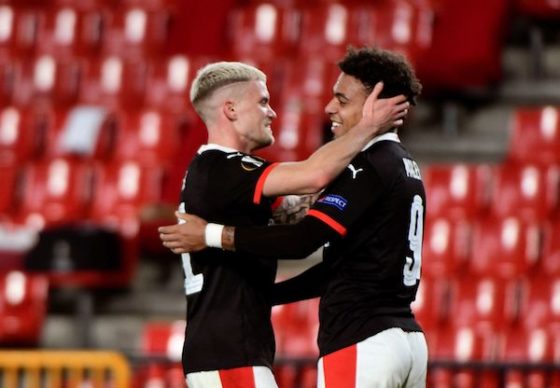 Football club PSV Eindhoven are assured a place in the knockout stage of this year’s Europa League competition after beating Granada 1-0 in a crucial duel.

Paok Salonki’s surprise loss to Omonia Nicosia pushed the Eindhoven team into the round of 32 with one game still left to play.

‘We showed from the beginning that we wanted to win today and to put everything in our own hands,’ PSV coach Roger Schmidt told Uefa. com. ‘We knew that maybe it was also possible to make [the route] clear for the knockout stage and at the end it happened.’

AZ Alkmaar managed a 1-1 draw against Napoli and remains in contention for a place in the next stage of the competition. AZ and Real Sociedad are both on eight points and AZ will take on bottom-placed Rijeka of Croatia in the final game on December 10.

In Group K, Feyenoord lost 0-2 to Dinamo Zagreb and are in third place with five points. But they too could still qualify next week when they meet second-placed Wolfsburger away.

Amsterdam football club Ajax are currently in third place in their group in the Champions League and even if they fail to reach the knock-out stages, will move back down to the Europa League.

The good performance by Dutch clubs in Europe so far this season has boosted the Dutch position on Uefa’s key coefficient list. The Dutch are now close on Russia’s heels and in eighth place.

A top 10 position is important to makes sure that the domestic league winners place directly for the Champions League, without have to go through preliminary rounds.