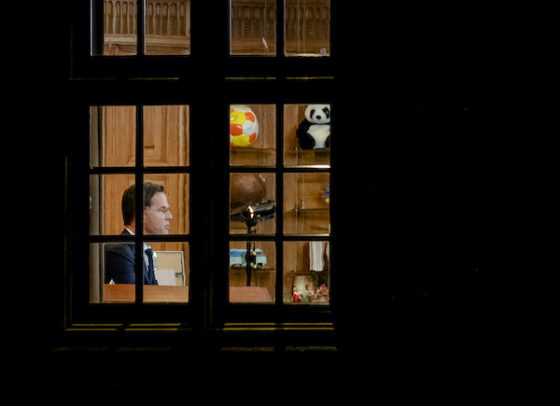 Prime minister Mark Rutte called on everyone in the Netherlands to work together to combat coronavirus in an address to the nation on Monday night, and urged people not to make plans to travel abroad until mid March at least.

Speaking from his private office in The Hague against a soundtrack of chants from anti coronavirus rules campaigners, Rutte said that he hoped this would be the last time he would have to speak directly to the population.

The Netherlands, Rutte said, is going into lockdown, involving all places where people come together. The aim, he said, is to reduce human contact to a minimum and so try to prevent the virus from spreading.

‘We realise just how far-reaching this decision is, particularly given that we are in the Christmas period,’ Rutte said. ‘This has been a year of sadness and mourning for many… and one in which stress and loneliness have moved through all the generations.’

Rutte urged everyone to keep to the rules, and said that the majority of the population are doing their best. ‘It is not an innocent flu … as the demonstrators outside seem to think,’ the prime minister said, referring to the noisy group chanting outside his office.

The new measures will remain in effect until January 19 and, Rutte said, he and health minister Hugo de Jonge will hold a press conference on January 12 to outline what the next stages will be.

The most far-reaching measure, Rutte said, is to close all schools, colleges and universities until January 18, with the exception of people taking exams or involved in practicals.

All non-essential shops will shut, but markets, chemists and dry cleaners and launderettes will remain open. ‘This is a hard message for some shops, but this is what we have to do,’ Rutte said. The scope of government support measures is being widened and the greater the loss, the more support shops can apply for, the prime minister said.

All public buildings will close, but libraries will remain open to exchange books. Hotels can stay open but can no longer provide their guests with food or drinks because ‘too many people are using hotels to eat out’, Rutte said.

Funeral parlours will remain open, and vulnerable groups will still be able to attend community centres, he said. All jobs involving physical contact but which are not of a medical nature will also be closed for the five week period. Cannabis cafes and restaurants can remain open for takeaway services, as they are at present.

Groups outside must be no greater than two, which means you can walk with a friend. as long as you keep 1.5 metres distance, Rutte said. Outdoor sport for adults is also limited to two, but walking and cycling are still to be recommended, the PM told viewers.

Travel too remains a controversial area. ‘Stay at home and don’t travel unless necessary,’ he said. ‘Of course, if you have rented a house for Christmas you can visit it, but while you are there, stick to the rules as well.’

Travel abroad for all but essential reasons should be avoided up to mid March,Rutte said. ‘The risks and uncertainties are too great,’ the prime minister said. ‘We will also ask our neighbouring countries to make sure their people do the same,’ he said.

From Tuesday, everyone arriving in the Netherlands from outside the EU will have to provide a document at Schiphol airport showing they have tested negative for the virus.

Working at home must once again become the norm and public transport is again being reserved for essential journeys. ‘We have to reduce work related infections, which are still far too high,’ he said, and appealed directly to employers, urging them to make it possible for people to work at home.

The prime minister ended on a positive note, telling his audience that things ‘will get better’. ‘There will come a moment when coronavirus is behind us,’ he said. ‘2021 will be a year of hope, when there is light at the end of the tunnel.’

‘In the coming weeks, it is all down to reducing contacts and we have to help each other to do this,’ he said. ‘We will get through this together, and for each other.’

Watch the complete speech
Read the speech in simple Dutch