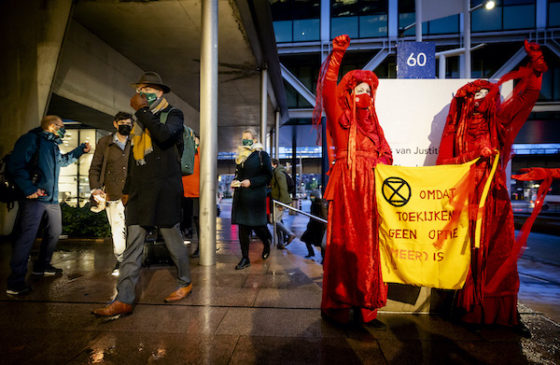 Campaigners outside the court, ahead of the first day. Photo: Robin van Lonkhuijsen ANP

Judges in The Hague will on Tuesday start hearing claims that oil giant Shell has not done enough to combat climate change in a case brought by environmental groups and supported by over 17,000 private individuals.

The plaintiffs, led by Milieudefensie (Friends of the Earth Netherlands), say that Shell has been aware of the damage it is causing for decades and that it is breaking the law by expanding its fossil fuel operations.

‘Shell maintains that is living up to the Paris agreements [for combating climate change] but in practice that is far from the truth,’ Milieudefense says. ‘Shell simply continues drilling for oil and gas and spends billions every year on oil and gas exploration.’

Milieudefense says Shell was aware that oil and gas use are ‘disastrous’ for the climate since the 1960s but has done nothing with the knowledge. More than that, it has paid lobby groups millions of euros a year to deny climate change exists, the organisation says.

Four days have been set aside for the public hearings, which will run into mid December. The case was first launched last year.

Shell, meanwhile, has described the Milieudefensie claims as ‘inappropriate and legally without foundation’.

Milieudefensie and its fellow campaigners identify Shell as the primary obstacle to achieving global climate ambitions by making ‘broad and sweeping statements, many of which are unsubstantiated or wrong, with over-reaching conclusions,’ Shell says in a website rebuttal of the charges.

‘For example, they assert that the Paris agreement is directly binding on Shell, and they allege that Shell had unique or special knowledge about CO₂-related climate change. These allegations are not true,’ the company said.

The Shell case is not the first time Dutch environmental groups have headed to the courts over climate change, but this is the first case against a private company.

A year ago, the Supreme Court ruled that the Dutch state is required to reduce greenhouse gas emissions to protect the health of its people, ending a seven year legal process.

The court said then that the Dutch courts do have the power to determine if the government is meeting its obligations, as set down in the European treaty of human rights, which commits the state to protecting its citizens.